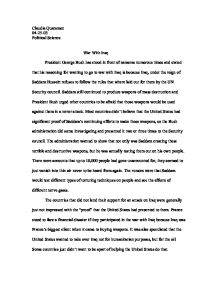 Claudia Quammen 04-25-03 Political Science War With Iraq President George Bush has stood in front of cameras numerous times and stated that his reasoning for wanting to go to war with Iraq is because Iraq, under the reign of Saddam Hussein refuses to follow the rules that where laid out for them by the UN Security council. Saddam still continued to produce weapons of mass destruction and President Bush urged other countries to be afraid that those weapons would be used against them in a terror attack. Most countries didn't believe that the United States had significant proof of Saddam's continuing efforts to make these weapons, so the Bush administration did some investigating and presented it two or three times to the Security council. The administration wanted to show that not only was Saddam creating these terrible and destructive weapons, but he was actually testing them out on his own people. There were accounts that up to 10,000 people had gone unaccounted for, they seemed to just vanish into thin air never to be heard from again. ...read more.

There are thousands of thousands of Iraqi soldiers that are thought to be killed during Iraqi Freedom. 157 coalition forces dies, 126 Americans and 31 British troops. An estimated 1,631-1,887 civilians have been killed which is a fraction of the number of civilians that were killed in Dessert Storm back in 1991. George Bush has said time and time again that the reason the American and British troops are fighting and willing to risk their lives, is to rid Iraq of Saddam Hussein and give the country back to the people. I think that with his careful efforts of planning buildings to attack and not to attack, he has been successful in the humanitarian aspect. One failed humanitarian aspect is the dropping of food. The American and British troops wanted to bring in food and water to the people of Iraq that were without. Unfortunately a lot of the fields that the food was being dropped into were covered with mines and the Iraqi people were either killed trying to get the food, or knew better than to try. ...read more.

It also made me wonder what will become of this country we just finished pulverizing? We won the war hands down. We either rid the country of Saddam, or the world. We will now begin the process of building the country back up. But I have to wonder how easy that will be. Will someone come in and take Saddam's place? Will there ever be a civil and just government? And who is going to monitor this? My prediction is that we will keep troops there for a year or two more. I think we will take over the oil (of course that isn't why we were there though) and we will try to Americanize the country of Iraq. I think it will cost our country millions of billions of dollars to do what is necessary to create a peaceful Iraq and to ensure Saddam is gone and never come back. Cooper, Patrick. (2003). Coalition Deaths Fewer Than in 1991. Retrieved April 25, 2003 from http://www.cnn.com Duensing, Jim. (2002). Why Does George W. Bush Hate Saddam Hussein? Retrieved April 25, 2003 from http://www.webleyweb.com/tle/libe186 Smith, Colonel Daniel. (2002). Is the US as War With the World? Retrieved April from http://www.fcnl.org/issues/int/sup/iraq_un-negotiations.htm ...read more.