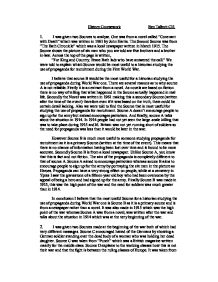 History Coursework Ben Talbutt C11 1. I was given two Sources to analyse. One was from a novel called "Covenant with Death" which was written in 1961 by John Harris. The Second Source was from "The Bath Chronicle" which was a local newspaper written in March 1915. The Source shows the picture of six men who you are told are five brothers and a brother in-law. Across the top of the page is written, "For King and Country. Brave Bath lads who have answered the call." We were told to explain which Source would be most useful to a historian studying the use of propaganda for recruitment during the First World War. I believe that source B would be the most useful for a historian studying the use of propaganda during World War one. There are several reasons as to why source A is not reliable. Firstly it is an extract from a novel. As novels are based on fiction there is no way of telling that what happened in the Source actually happened in real life. Secondly the Novel was written in 1961 making this a secondary Source (written after the time of the event) therefore even if it was based on the truth, there could be certain detail lacking. ...read more.

At this early point in the war before the huge death tolls of 1915 had been seen, it was believed that mainly the working classes would end up fighting in the war. The Labour Party made Source D to explain to the working class how they were against the war and that it was unfair that the working class should have to fight the war of the ruling classes. However Source C is aimed at the middle classes. At this point in the war it was believed that they would suffer less from the war, as it was the working class that would do all of the fighting. Source C was made to encourage hatred of the Germans as in 1914 when this Source was made the middle classes were not yet opposed to the war. In conclusion, I believe that the reason why Source C and Source D have such different attitudes is because they were aimed at different classes of people. 3. I was given nine Sources from A to I and had to decide if in these Sources there was sufficient evidence to support the interpretation, "The most important aim of wartime propaganda was to encourage hatred of the enemy." I first looked at Source A. ...read more.

The song says how when a woman writes to her husband oh the frontline that she should send him a cheerful rather than a sad one. This Source definitely does not encourage hatred of the enemy but instead is brings compassion towards the men on the frontline. Source H was a poster saying "Britons wants you. Join your country's army!" but on top of that was written, "Your King and Country needs you You hardy sons of toil But will your King and Country need you When they're sharing out the spoil?" Instead of being propaganda that encouraged hatred of the Germans, this is encouraging people to sign up for the army. But the warning rhyme written on the top is anti-war. Therefore this also does not support the interpretation. Finally Source I is a drawing of a British cavalryman charging a group of Germans and overcoming the whole group of them. This propaganda portrays the cavalry as heroes where the truth was that the cavalry during World War One were useless, they could not move through the mud, gun fire and shells scared the horses and if the horse was shot the rider was likely to then die or be captured as a result. However this propaganda still does not support the Interpretation. In conclusion, I believe that wartime propaganda was not to encourage hatred of the enemy but instead to encourage patriotism and to encourage people to join the army. ...read more.