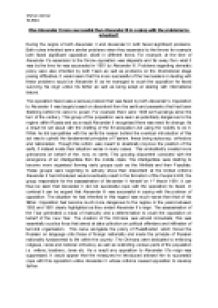 Was Alexander II more successful than Alexander III in coping with the problems he inherited?

﻿Mohsin Akhtar W-RMG Was Alexander II more successful than Alexander III in coping with the problems he inherited? During the reigns of both Alexander II and Alexander III both faced significant problems. Both rulers inherited some similar problems when they ascended to the throne for example both faced significant opposition, albeit in different forms. For example, at the time of Alexander II?s ascension to the throne opposition was disparate and far away from what it was by the time he was succeeded in 1881 by Alexander III. Problems regarding domestic policy were also inherited by both Tsars as well as problems on the international stage posing difficulties. It would seem that the more successful of the two leaders in dealing with these problems would be Alexander III as he managed to crush the opposition he faced surviving his reign unlike his father as well as being adept at dealing with international issues. The opposition faced was a serious problem that was faced by both Alexander?s. Opposition to Alexander II was largely based on discontent from the serfs and peasantry that had been festering before he came to power. For example there were 1468 serf uprisings since the turn of the century. This group of the population were seen as potentially dangerous to the regime within Russia and as a result Alexander II recognised there was need for change. ...read more.

writers, teachers, Jews etc. As a result any opposition to Alexander III?s reign was suppressed. It would appear that the measures he introduced allowed him to successful cope with this opposition unlike Alexander II whose reforms caused opposition to develop further. Alexander II came to the power with the backdrop of the Crimean War in 1855. This war had highlighted the various incompetency?s of Russia as a nation, making them appear weak and backward in comparison to the Western European nations. As a result Alexander II saw the need for the introduction of reforms to bring Russia up to date with the West. Aside from the aforementioned Emancipation Act there were various other reforms. He decided that the country needed to develop on an industrial level. In order to do this Alexander II drew up plans for a massive investment in railways. The emancipation, he hoped, would lead to greater agricultural output, in order to finance the railways, and the beginnings of Russia's industrialisation. He also invested in new iron and steel works for armaments and new manufacturing industries. However these plans never came to fruition during his rule with the dissatisfaction amongst the serfs playing a key part to this. Though he may have not been successful in this area the creation of Zemstvos as well as changes to the legal system and education on the surface appeared to bring Russia up to date with Western Democracies. ...read more.

Although they made gains in several areas they took a huge financial hit and had been isolated from the other European superpowers as they allied together. When Alexander II came to power he thus inherited these problems. He however was much more adept at dealing with international affairs than his father and predecessor was. Alexander III proved to be quite the negotiator gaining the title of ?Alexander the Peacemaker?. He aimed at avoiding war at all costs and was tolerant of Otto von Bismarck, a conservative German statesman who dominated European affairs from the 1860s to his dismissal in 1890. Bismarck had a quite belligerent attitude towards Russia, and Alexander II was able to revive the ancient league of 3 emperors in 1884. During his reign as Tsar Alexander had managed to avoid war and create some kind of international security whereas under Alexander II Russia still seemed vulnerable as a result the problems inherited on the international stage were handled more successfully by Tsar Alexander III. In conclusion, it can be seen that Alexander III was more successful than Alexander II in coping with the problems he inherited. Although Alexander II?s handling of domestic policy and modernisation was superior, Alexander III?s ability to successfully get rid of opposition, through things methods such as the Okhrana, and his handling of the international situation make it clear that he was the more successful Tsar in coping with the problems he inherited. ...read more.