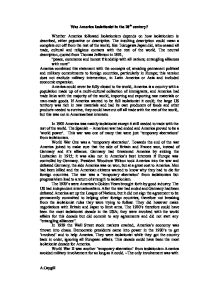 Was America Isolationist in the 20th century?

Was America Isolationist in the 20th century? Whether America followed Isolationism depends on how isolationism is described, either pejorative or descriptive. The insulting description could mean a complete cut off from the rest of the world, like Tokugawa Japan did, who ceased all trade, cultural and religious contacts with the rest of the world. The neutral description, quoted from Thomas Jefferson in 1801, "peace, commerce and honest friendship with all nations; entangling alliances with none" America combined this statement with the concepts of, avoiding permanent political and military commitments to foreign countries, particularly in Europe; this version does not exclude military intervention, in Latin America or Asia and included economic expansion. America could never be fully closed to the world, America is a country with a population made up of a multi-cultural collection of immigrants, and America had trade links with the majority of the world, importing and exporting raw materials or man-made goods. ...read more.

Men had been killed and the American citizens wanted to know why they had to die for foreign countries. The war was a 'temporary aberration' from isolationism but progressivism lead to a return of strength to isolationism. The 1920's were America's Golden Years brought forth by good industry. The US had independent internationalism. After the war had ended and Germany had been defeated America set up the League of Nations, but it did not sign the agreement to be permanently committed to helping other foreign countries, therefore not breaking from the isolationist rules they were trying to follow. They did however make negotiations with Britain and Japan to limit arms. The 1920's therefore could have been the most isolationist decade in the USA; they were involved with the world affairs for this decade but did commit to any agreements and did not start any "entangling alliances". In 1929 the Wall Street stock markets crashed, America's economy was thrown into chaos. ...read more.

America joined NATO and SEATO, promising to give aid and protection to the European countries that were being threatened by Communism. It could be said that this was still its own interests, being a Capitalist country threatened by communism, using 'selective isolationism'. But joining these organisations was a permanent commitment to them, directly against isolationism. Two smaller wars, part of the larger scale war, were in Korea and Vietnam proved there was a complete break in America isolationism. Vietnam was a full war with no strong interest for America, they lost in the end. During the 20th century America tried to maintain an isolationist foreign policy. It experienced a few 'temporary aberrations' from isolationism during this time as it tried to defend its interests in Europe. The last break in Isolationism was caused by the Cold War, starting in 1945 when America when America got fully involved with 'entangling alliances'. The most isolationist decade would be the 1930's, when America was in chaos and needed all concentration on internal affairs instead of European or World ones. A.Caygill ...read more.