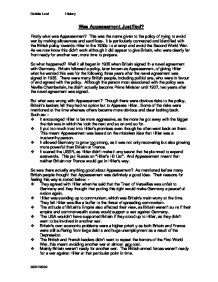 Was Appeasement Justified? Firstly what was Appeasement? This was the name given to the policy of trying to avoid war by making allowances and sacrifices. It is particularly connected and identified with the British policy towards Hitler in the 1930s to attempt and avoid the Second World War. As we now know this didn't work although it did appear to give Britain, who were clearly far from ready for another war, more time to prepare. So what happened? Well it all began in 1935 when Britain signed the naval agreement with Germany. Britain followed a policy, later known as Appeasement, of giving Hitler what he wanted this was for the following three years after the naval agreement was signed in 1935. There were many British people, including politicians, who were in favour of and agreed with the policy. Although the person most associated with the policy was Neville Chamberlain, he didn't actually become Prime Minister until 1937, two years after the naval agreement was signed. ...read more.

* The attitude of Britain's Empire also affected their view, as Britain weren't sure if their empire and commonwealth states would support a war against Germany. * The USA wouldn't have supported Britain if they stood up to Hitler, as they didn't want to be involved in another war. * Britain's own economic problems were a higher priority as both Britain and France were still suffering from large debt s and huge unemployment as a result of the Depression. * The British and French leaders didn't want to repeat the horrors of the First World War, this meant avoiding another war at almost any cost. * Mainly Britain weren't ready for another war. The British armed forces weren't ready for a war against Hitler at that particular point in time. Appeasement "brought" time for rearmament; at least that is what the following graphs appear to say. Graph one - Compares Britain's (regular army and reserves) army divisions ready to fight with Germany's army divisions ready to fight. ...read more.

They say that to face up to Hitler Chamberlain had to be prepared to take Britain into a war. All the evidence available to Chamberlain told him Britain was not ready. Public opinion was against it - his own civil service advisers had told him this. Important countries in the empire were against it. The USA was against it. And most importantly, Britain's armed forces were not ready anyway. They were badly equipped and had felled far behind the Germans (see the charts previously). After great consideration and summing up both the good and bad points of Appeasement I feel the Appeasement was justified. As I feel that the good points over rule the bad. And you can't be sure that if Britain or France had stood up to Hitler then he would have backed off as you can't go back and change it to find out. Besides Britain would have been destroyed if war had been declared there and then, as they were clearly not prepared or ready. So, was Appeasement justified? I think it was so from my point of view... YES!!! Debbie Lord History 02/01/2003 ...read more.