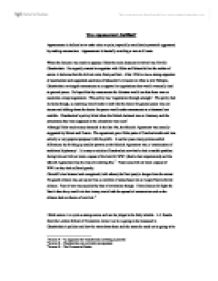 Was Appeasement Justified? Appeasement is defined as to make calm or quiet, especially conciliate (a potential aggressor) by making concessions. Appeasement is basically avoiding a war at all costs. When the decision was made to appease Hitler the main character involved was Neville Chamberlain. He urgently wanted to negotiate with Hitler and Mussolini but the author of source A believes that this did not come from pacifism. After 1934 he was a strong supporter of rearmament and supported sanctions of Mussolini's invasion on what is now Ethiopia. Chamberlain envisaged rearmament as a support for negotiations that would eventually lead to general peace. He hoped that by rearmament the dictators would see that there was no resolution except negotiation. This policy was 'negotiation through strength'. The policy had its faults though, as rearming would make it look like the desire for general peace was not sincere and talking about the desire for peace would make rearmament as a deterrent less credible. Chamberlain's policy failed when the British declared war on Germany and the armaments that were supposed to be a deterrent were used.1 Although Hitler made many demands in the late 30s, the Munich Agreement was actually suggested by Britain and France. ...read more.

A.J. Beattie from the London School of Economics wrote it so he is going to be interested in Chamberlain's policies and how he went about them and the errors he made so its going to be fairly facts based. I think he writes it quite fairly but states if he thinks Chamberlain made mistakes. He defends Chamberlain as well though in the last paragraph when he talks about the critics having the huge advantage of hindsight. The source is about Chamberlain and the reasons he appeased Hitler (mentioned previously). The author doesn't believe that Chamberlain was a pacifist but that he didn't want a horrific war. He believes that the 'negotiation through strength' policy was quite a bad one as it meant Chamberlain would be subject to criticism and in fact he couldn't win as he was promoting peace and rearmament at the same time.4 Source B talks about the Munich Agreement and as it was written as advice for conscientious objectors it is going to be for anything that will avoid a war and is therefore pro Chamberlain. ...read more.