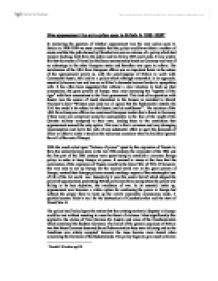 Was appeasement the only option open to Britain in 1938-1939? In answering the question of whether appeasement was the only option open to Britain in 1938-1939 we must consider that the policy could have taken a number of routes and that the path chosen by Chamberlain was an extreme of a policy which had massive backing, both from the public and his fellow MPs and Lords. It was widely felt that the treaty of Versailles had been unreasonably harsh on Germany and was of no advantage to the other European states and therefore was open to reform. The isolationism of the USA from European affairs was an important factor in the nature of the appeasement policy as, with the unwillingness of Britain to work with Communist Russia, this lead to a policy which although reasonable in its approach, essentially became less and less so as Hitler's demands became harder to sympathise with. It has often been suggested that without a clear intention to back up their concessions, the great powers of Europe were only increasing the "appetite of the tiger" with their concessions to the Nazi government. This lack of co-operation with Russia was the source of much discontent in the houses as recorded in Harold Nicolson's diary "Winston says (and we all agree) ...read more.

This fear again seemed to confirm the British politicians belief that appeasement was the only option. There was also a common belief that appeasement would allow the British army to re-arm itself against the might of the German army so that when the unavoidable did happen Britain would be in a better place to defend itself. Indeed polls from 1938-1939 show almost half the British public supporting the policy for exactly this reason, although again this was a misconception, as in Sept 1938 the German air strength numbered 2 847 with 1 6692 immediate reserves and France and Britain had between them 3 436 with 1 642 immediate reserves. Had the British public and politicians known this, would they have preferred a more assertive foreign policy? By Sept 1939 however Germany had increased its force to 3 609 first-line strength aircraft and 2 893 immediate reserves while Britain and France had, between them, 3 703 first-line strength and 1 600 immediate reserves, with much of its force out dated 3 800 out dated reserves. This would obviously lead to the conclusion that Britain was in a better position to fight Germany in 1938 than in '39, something contradictory to public opinion of the time. Because of this neither the British nor French governments made any real attempt to threaten Hitler with the consequences of non-compliance and he was therefore able to use their appeasement as a means of continuing his path to European dominance. ...read more.

In both cases the League failed to take appropriate action, only calling for a "moral sanction" against Japan for its invasion of Manchuria. Although it did impose economic sanctions against Italy after it's invasion of Abyssinia including arms sales, it also imposed arms bans against Abyssinia weakening it severely. In 1935 an agreement was then signed allowing Mussolini most of Abyssinia. Those in favour of the policy of appeasement cited the inactivity of the League in dealing with these disputes as clear signals that Britain would have to solve the problems of the Nazi state through its own diplomatic means. The league was most harshly effected by it's lack of a coalition army to back up its mandates and without the force of the Americans behind them both Mussolini and Hitler effectively chose to ignore them. In light of this it would appear that by 1938 Appeasement really was the only option in the face of a crippling World War to protect a state and people of whom the British policy makers appeared to care little. Had there not been a massive public support for the avoidance of war and had some politicians not actually admired Hitler for his ruthless destruction of the "Red menace" then perhaps Britain would have carried out this policy with a different manner but as it was they seemed, in general, more than happy to give Hitler what he wanted, when he wanted, a fatal mistake if ever there was one. ...read more.