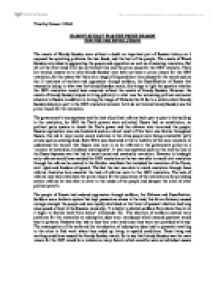 was bloody sunday the prime reason for the 1905 revolution

The abolition of serfdom created more problems for the monarchy as redemption dues were introduced which ensured peasants would stay in poverty. Peasants also had to buy their own land since they were not provided with any. The emancipation of the serfs and the introduction of redemption dues lead to peasants travelling to the cities to find work where they ended up living in squalid conditions. These living and working conditions caused the bloody Sunday march. So to say that bloody Sunday was the main reason for the 1905 would be a mistake as many factors which could be seen as individual causes for the 1905 revolution lead up to the bloody Sunday march. This would however show the significance of the events of bloody Sunday in leading to the revolution, as people had not yet revolted because they still felt it was not the tsars fault for their suffering moreover he was still viewed as their 'little father'. The protest was merely to present a petition but the events that occurred may have triggered revolution as the results of bloody Sunday involved widespread disorder and strikes in the cities and eventually spread to the countryside. Consequently bloody Sunday may have not been a prime reason for revolution but one of many triggers of the revolution. ...read more.