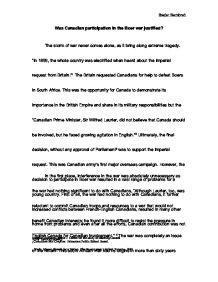 Was Canadian participation in the Boer

Was Canadian participation in the Boer war justified? The storm of war never comes alone, as it bring along extreme tragedy. "In 1899, the whole country was electrified when heard about the Imperial request from Britain."1 The Britain requested Canadians for help to defeat Boers in South Africa. This was the opportunity for Canada to demonstrate its importance in the British Empire and share in its military responsibilities but the "Canadian Prime Minister, Sir Wilfred Laurier, did not believe that Canada should be involved, but he faced growing agitation in English."2 Ultimately, the final decision, without any approval of Parliament3 was to support the Imperial request. This was Canadian army's first major overseas campaign. However, the decision to participate in Boer war resulted in a vast range of problems for a young country. First of all, the war had nothing to do with Canadians, it further increased conflicts between French-English Canadians, resulted in many other home front problems and even after all the efforts, Canadian contribution was not fully recognised. In the first place, interference in the war was absolutely unnecessary as the war had nothing significant to do with Canadians, "Although Laurier, too, was reluctant to commit Canadian troops and resources to a war that would not benefit Canadian interests; he found it more difficult to resist the pressure in English Canada for Canadian involvement." ...read more.

Ethnic groups, perhaps even more so than they do today, commonly saw themselves as superior to materialistic English Canadians. French Canadians opposed any participation. Interpreting the conflict as one to preserve a minority culture in the face of British imperialism, they sympathized with the Boers. Accordingly, the fight was purely a British one, and Canada should not be involved. The French opposition was lead by expressive French-Canadian nationalist, Henri Bourassa. Suspicious of the aims of British imperialism, Bourassa feared that Canadian participation would set as an example for involvement in future conflicts. "The French-Canadian opinion was certainly not massive on the issue, the majority supported Bourassa's views and saw Canada's entry into the war as an act of subservience to the British Empire."8 Bourassa argued, should go to war purely on the basis of its own national interests. The Montr�al riot broke out which was the most violent incident between French and English over the Canadian participation in war.9 In contrast, in English Canada, the excitement to show loyalty to Britain was extremely high. Not surprisingly, when the Boer War broke out, the tremendous enthusiasm in English Canada to fight for the mother country even though there was intense reaction in Quebec against the conflict. They were in complete favor of any imperial request by Britain. ...read more.