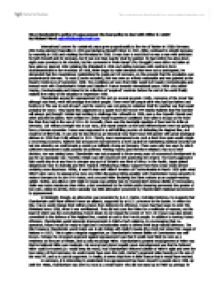 Was Chamberlain's policy of appeasement the best policy to deal with Hitler in 1938? By Richard Ward wattsvilleblues@hotmail.com International concern for sustained peace grew proportionally to the rise of Nazism in 1930s Germany. After being elected Chancellor in 1933 and declaring himself F�hrer in 1934, Hitler continued to rebuild Germany by rearming in 1935 and retaking the Rhineland in 1936. It was clear to most that he was a man with ambitions for both himself and for Germany, but it was not clear exactly what he wanted. He had written his aims down eight years previous to his election, but his comments in 'Mein Kampf' ('My Struggle') were either not taken at face value or ignored. After retaking the Rhineland in 1936 and uniting Germany with Austria to form Gro�deutschland in the Anschluss of 1938, Hitler began to make demands that were not so anticipated. He demanded that the mountainous Sudetenland be made part of Germany, on the grounds that the population was predominantly German. To most (Czechs excluded), this was seen as entirely reasonable and was granted at the Munich Conference of September 1938. The conditions set were that Hitler would not invade Czechoslovakia and instead work with Chamberlain's Britain and Daladier's France towards international peace. ...read more.

In the Pacific, Japan poised dangerously near to Australia and New Zealand. Withdrawing military support from these areas would almost certainly prove disastrous. Fifthly, it wasn't clear until Hitler's invasion of Czechoslovakia in March 1939 quite what Hitler's aims were. He appeared as two; one Hitler discussing fishing amiably with Chamberlain trying earnestly to restore Germany to its pre-1914 status, and a second Hitler declaring the Slavic nations as an oxygen-wasting rabble. Sixthly, any alliance with Stalin in Russia was unlikely due to Chamberlain's intense dislike of Communism. Stalin was more murderous than Hitler, a fact overlooked by the British public favouring perversely the greater of two evils. Added to all this, there naturally was little alternative presented by Chamberlain's National Government to appeasement. In hindsight, though, an alternative was presented by R.A.C. Parker, Oxbridge historian. He suggests that Chamberlain could have offered France an alliance, supported by a B.E.F. presence on the border. In return for this, France would change their military stance from defensive to offensive. France had had cause to enter the Rhineland since 1936, when it was remilitarized. They did not cross the Rhine for a multitude of reasons, not the least of which was the overwhelming French desire to not repeat the events of 1914-18. ...read more.

It would have surely been disastrous for Britain to have entered into a conflict for which it was not prepared. The population was also not going to volunteer itself either for the effects of inflation or the burden of increased taxes. Singularly, Chamberlain can be defended on the grounds that his hesitation and half-measures actually saved Britain from a war it would never have won if started in March 1939. From the 1960s, the informed judgement of Chamberlain has been more appreciative of the constraints under which he was operating. The country remembered just how much they lauded Chamberlain and his meaningless (although they were not to know this at the time) little piece of paper. If Chamberlain had entered into war at the first sign of German aggression, he would have been cast in the same light as Winston Churchill, then a warmongering political renegade. Chamberlain was also bound by the inability to mount an effective B.E.F. representation on the continent. Britain had disarmed post-1918 (made popular by public opinion and the League of Nations) and had a small army backed up by a strong, yet overstretched navy. The Royal Navy was responsible for the defence of the British Empire, and so was represented in part over most of the world. The policy of appeasement, as applied by Neville Chamberlain was the best policy to deal with the politically ambiguous Hitler in 1938. ...read more.