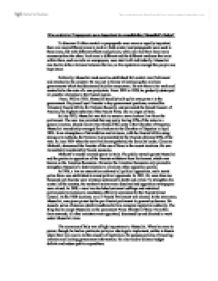 Was control or Propaganda more important to consolidating Mussolini's Reign

Was control or Propaganda more important to consolidating Mussolini's Reign? To discover if either control or propaganda were more or equally important, there are many different areas to look at. Both control and propaganda were used in these areas, but with different effects and policies, while one may have been more necessary than the other. Each area is different and the different mediums that exist within them, such as radio or newspapers, were dealt with individually. Mussolini also had to strike a balance between the two, so his reputation amongst the people was kept intact. Politically, Mussolini made sure he established full control over Parliament and eventually, the country. He was not in favour of continuing the coalition governments which had dominated Italy for many years. He saw them to be weak and wanted to be the ruler of a one party state. From 1922 to 1929, he gradually destroyed all possible alternates to the Fascist regime. From, 1922 to 1923, Mussolini steadily built up his own power in the government. He placed loyal Fascists in key government positions, created the Voluntary Fascist Militia for National Security, and promoted the Grand Council of Fascism, the highest authority of the Fascist Party, into an organ of state. In July 1923, Mussolini was able to secure a new electoral law from the parliament. ...read more.

This control over the economy led to several problems. Exports were too expensive for other countries, smaller firm went out of business, it caused serious deflation and in 1936, the Lira had to be devalued. The battles for grain and the marshes were more successful. The Fascist aim of being self-sufficient in grain was achieved, but fertiliser self-sufficiency was not. Also, other forms of farming suffered and the price of bread rose. The battle of the marshes was the most successful. This created jobs by draining the Pontine marshes around Rome and ridding them of disease. Only 80,000 hectares of land were reclaimed by 1938, which was 1/20th of the propaganda claim. It did however create jobs and improve public health. Economically, Mussolini relied of propaganda to retain a positive image. In truth, his battles for Lira and grain were not successes and the propaganda which followed kept public faith in his policies. Also in the successful 'Battle for the Marshes', propaganda was used to fabricate the claims made about land repossession. In truth much less was reclaimed than was stated and plans made for the land were never realised. Social unrest was not possible under Mussolini's regime. In social policy, the workers' unions were replaced by the Corporations, directly controlled by the replaced by National Council of Corporations. ...read more.

Mussolini pursued his aggressive foreign policy rather cautiously up to the end of the 1920's because he did not want to arouse great opposition from the big powers, France and Britain. Mussolini first invaded Abyssinia in 1935. This was followed by the formation of Rome-Berlin Axis in November 1936. During the Spanish Civil War (1936-39) Mussolini also gave almost unlimited support to Franco. The military gains were used for propaganda purposes. These served to show Italy as a major power again and that more victories and power were to come. For foreign policy therefore, it appears that propaganda was more important. Overall, propaganda and control were equally important. Control made sure that Mussolini came to power and stayed there in the early years of his rule, while propaganda meant Fascist policy and the status of the country were always shown to be positive. Both served different purposes in different aspects of Mussolini's reign and both were used equally to consolidate his power in certain areas such as the economy, propaganda proved to be of more importance in order to keep the public on the side of the Fascists and in order to portray the picture they wanted the people to see. Elsewhere, control in the area of politics meant he became the dictator of Italy and also kept the powerful church out of running the country. In effect, both served the same purpose, in keeping Mussolini popular with the people, but both were undertaken in separate ways. ...read more.