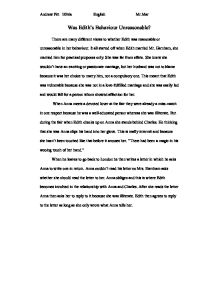 Was Edith's Behaviour Unreasonable? There are many different views to whether Edith was reasonable or unreasonable in her behaviour. It all started off when Edith married Mr. Harnham, she married him for practical purposes only. She was far from effete. She knew she wouldn't have an exciting or passionate marriage, but her husband was not to blame because it was her choice to marry him, not a compulsory one. This meant that Edith was vulnerable because she was not in a love-fulfilled marriage and she was easily led and would fall for a person whom showed affection for her. When Anna meets a devoted lover at the fair they were already a miss-match in one respect because he was a well-educated person whereas she was illiterate. But during the fair when Edith checks up on Anna she stands behind Charles. ...read more.

As soon as Edith starts the letter she is already interfering with the relationship. This is because Edith doesn't just write what Anna tells her she contributes herself. Although Edith did have the decency to try and educate Anna herself, Anna didn't have the encouragement or enthusiasm to learn how to write herself but insisted that Edith wrote them, this I feel was unfair of Anna because she gave up and left Mrs.Harnham to write them, although this was an opportunity for Edith to say that she will not write to him and it's up to her to be to learn how to read and write them herself. Edith writing the letter at first was fair and with a good intention from Edith but then when he reply's to the letter he is replying to Edith not Anna because Edith was the one who wrote the letter. ...read more.

When Charles finds out that it wasn't Anna he actually fell in love with but it was Edith it was too late for him because they had just married. I conclude that Edith's conduct was unconscionable although I do have some sympathy for her. First of all if Anna were literate none of this would have happened. Edith tried to educate her but Anna was helpless. On the other side she was put into an awkward situation because they grew up together and when Anna asked her to write to Charles it was hard for her to say no but I think it would have been moral and justified. Edith starts the letters with good intentions but should have notified who was writing them. Edith was inexcusable because she should have known when to stop and she had plenty of opportunities to Charles. Andrew Pitt 10Ma English Mr.Mar ...read more.