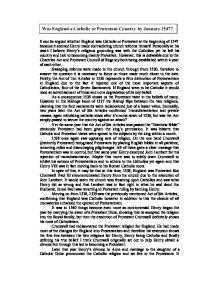 Was England a Catholic or Protestant Country by January 1547?

It can be argued whether England was Catholic or Protestant at the beginning of 1547 because it seemed Henry made contradicting church reforms himself. Personally at his death I believe Henry's religious grounding was with the Catholics yet he left his country and heir to becoming mainly Protestant. However, this is debatable due to the Chantries Act and Protestant Council of Regency both being established within a year of each other. Sweeping reforms were made to the church through from 1530, therefore to answer the question it is necessary to focus on those made much closer to the date. Firstly, the Act of Ten Articles in 1536 represents a firm distinction of Protestantism in England due to the fact it rejected one of the most important aspects of Catholicism, four of the Seven Sacraments. If England were to be Catholic it would need an advertisement of these and not a degradation of its key belief. As a consequence 1536 shows us the Protestant twist in the beliefs of many. However in the Bishops book of 1537 the Bishop flips between the two religions, claiming that the four sacraments were rediscovered just of a lesser value. ...read more.

It was in 1540 things become even more as controversial. Henry began the year by marrying the sister of a Protestant Duke, showing that he accepted the religion into the Royal family, but then the execution of Protestant Cromwell definitely shows his roots of Catholicism. Cromwell had rediscovered the Protestant religion for England. He had made most of the changes for England into Protestantism and therefore his execution shows the fine line between the two religions for Henry, Henry being Catholic and finally defining his true belief. I think Cromwell originally set out to help Henry obtain a divorce but through this led to becoming a Protestant. Later that year Henry's divorce to Anne and marriage to the daughter of a Catholic Duke pronounced the Catholic religion and set fire to the Protestants. It would seem the King was Catholic, yet the country would remain Protestant. All the monasteries had been closed and the presence of English bibles in churches spread the word of the Protestants. It would be even more so, due to the fact the Pope in Rome no longer controlled the church as Catholic since it was under Henry, as in the Act or Supremacy. ...read more.

It had no monasteries, no chantries and the Seven Sacraments had been suppressed. In addition in the next few years England would be receiving a Protestant-taught king. However England had a Catholic King. Before he died three new monasteries were built to pray for Henry's soul. This shows his belief. Yet in 1547 it was obvious due to his execution of Cromwell and The King's Book. I think that what turned into just wanting a divorce for Henry cascaded into changing the structure of the church to get it. He never directly claimed to be Protestant and always set his ways to being Catholic. Even if he changed to Protestant in the beginning to get an annulment he changed back to Catholic. Saying this, he still had Protestant twists in him. For example he did not like relics or images. This meant that he left England behind still being Protestant. I think that he thought if he left his heir Protestant then he would get on with the country he knew he must have left behind. Even though the king was the most powerful being of England and lay down the law to being catholic the country fell short of achieving it and was in January 1547 Protestant. PHILIPPA TREVERTON-JONES ...read more.