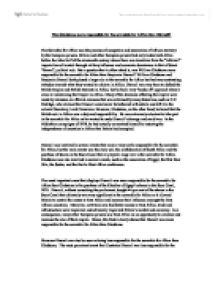 Was Gladstone more responsible for the scramble for Africa than Disraeli?

Was Gladstone more responsible for the scramble for Africa than Disraeli? The Scramble for Africa was the process of occupation and annexation of African territory by the European powers. Britain and other European powers had only traded with Africa before the latter half of the nineteenth century where there was transition from the "informal" imperialism of control through military influence and economic dominance to that of direct "formal", political rule. But a question that is often asked is, was William Gladstone more responsible for the scramble for Africa than Benjamin Disraeli? William Gladstone and Benjamin Disraeli both played a large role in the scramble for Africa but had very contrasting attitudes towards what they wanted to achieve in Africa. Disraeli was very keen to defend the British Empire and British Interests in Africa, but he had a very 'hands off' approach when it came to maintaining the Empire in Africa. Many of the decisions affecting the empire were made by ministers or officials overseas that was criticised by many historians, such as C.C Eldridge, who claimed that Disraeli could never be bothered with details and left it to the colonial Secretary, Lord Carnarvon. ...read more.