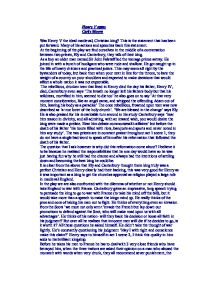 Was Henry V the ideal medieval, Christian king? This is the statement that has been put forward. Many of his actions and speeches back this statement.

Henry V essay Carly Moore Was Henry V the ideal medieval, Christian king? This is the statement that has been put forward. Many of his actions and speeches back this statement. At the beginning of the play we find ourselves in the middle of a conversation between two priests, Ely and Canterbury, they talk of their king. As a boy an older man named Sir John Falstaff led the teenage prince astray. He joined in with a bunch of hooligans who were rude and shallow. He got caught up in the life of heavy drinkers and practical jokers. This may seem all right by the bystanders of today, but back then when your next in line for the throne, to bare the weight of a country on your shoulders and expected to make decisions that would affect a whole nation it was not expectable. The rebellious, drunken teen that lived in Henry died the day his father, Henry IV, died, Canterbury even says 'The breath no longer left his fathers body but that his wildness, mortified in him, seemed to die too' he also goes on to say 'At that very moment consideration, like an angel came, and whipped the offending Adam out of him, leaving his body as a paradise' The once rebellious, frowned upon teen was now described as 'a true lover of the holy church'. 'We are blessed in the change' says Ely. ...read more.

He couldn't do any thing to hurt or jeopardise the king. In this scene the king shows he is ruthless, cunning and manipulative. He was most upset by the betrayal of his lord Scroop, the king even says 'Thou did'st bear the key of all my counsels, that knew'st the very bottom of my soul' but despite all the emotion he's probably felt he turned all his attentions to the war with France. This scene proves he realises as a king you must show mercy and love to his people and his physical and mental strength as a king to those who have the power to harm you. Henrys Victory at Harfleur shows his ability to as a motivational leader, he gives one of his famous speeches to his army that just his whole army rearing to go, 'For I am a soldier, a name that in my thoughts becomes me best, if I become the battery once again I will not leave harfleur till in her ashes she lies buried.' The king shouts down at his men raring them on with every word. He also shows that he wasn't afraid to get stuck in the thick of it with his men and once again he shows us of his cunning intellect. Show the French mercy he says after the battle was won. He wanted to get the French's backing and realised by setting fire to their belongings and being mean he would never accomplish that and gain their trust. ...read more.

Everyone leaves the room leaving Henry, Katherine and her maid Alice ( to translate) together. To begin with Henry is very pragmatic 'for if thou couldst thou wouldst find me such a plain king that thou wouldst think I had sold my farm to buy my crown' but he dose woo her over with some romantic words, but I think this may been him just thinking on his feet rather than being romantic, he says 'An angel is like you, Kate, and you are like an angel' and 'there is witch craft in your lips'. He dose get annoyed with Katherine though 'can any of your neighbours tell, Kate? I'll ask them' he snapped at her when she couldn't make up her mind. Katherine asks 'is it possible dat I should love de ennemi of France?' once again we see Henry using his brain and thinking on his feet, he replies 'In loving me you should love a friend of France, for I love France so much that I would not part with a village of it .I will have it all mine'. So I conclude that Henry was the ideal Christian, medieval king. He had all the qualities needed, he was nice, smart, a good warrior, wasn't arrogant, ruthless and cunning; the list goes on. Henry was just what England needed despite his out of control teen years. He may not of made a particular good friend but being a good king and good friend are two totally different things. ...read more.