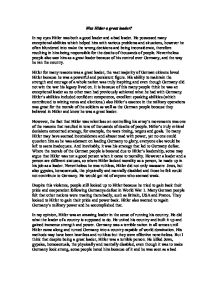 In my eyes Hitler was both a good leader and a bad leader. He possessed many exceptional abilities which helped him with various problems and situations, however he often blundered into make the wrong decisions and being inconsiderate, therefore resulting in him being responsible for the deaths of thousands of people. Nevertheless people also saw him as a great leader because of his control over Germany, and the way he ran the country.

Hitler for many reasons was a great leader, the vast majority of German citizens loved Hitler because he was a powerful and persistent figure. His ability to maintain the strength and courage of a whole nation was truly inspiring and even though Germany did not win the war his legacy lived on. It is because of this many people think he was an exceptional leader as no other man had previously achieved what he had with Germany. Hitler’s abilities included confident competence, excellent speaking abilities (which contributed to wining votes and elections.) also Hitler’s essence in the military operations was great for the morale of the soldiers as well as the German people because they believed in Hitler and knew he was a great leader.

However, the fact that Hitler was relentless on controlling his army’s movements was one of the reasons that resulted in tens of thousands of deaths of people. Hitler’s truly critical decisions concerned strategy, for example, the wars timing, targets and goals.To many Hitler may have seemed inconsiderate and almost mad with power, yet no one could question him as he was adamant on leading Germany to glory, everyone else would be left to seem inadequate. And inevitably, it was his strategy that led to Germany defeat. Where the morale of the German people is boosted due to Hitler’s leadership, some may argue that Hitler was not a good person when it came to morality. However a leader and a person are different statuses, so where Hitler lacked morality as a person, he made up in his job as a leader. Nevertheless he was ruthless, Hitler did not only massacre  Jews, but also gypsies, homosexuals, the physically and mentally disabled and those he felt could not contribute to Germany. He would get rid of anyone who seemed weak.

Despite this violence, people still looked up to Hitler because he tried to gain back their pride and cooperation following Germanys defeat in World War 1. Many German people felt that other nations were treating them badly, such as Britain, USA and France. They looked to Hitler to gain their pride and power back. Hitler also wanted to regain Germany’s military power and he accomplished that.

In my opinion, Hitler was an amazing leader in the sense of running his country. He did what the leader of a country is supposed to do. He united his country and built it up and gained immense strength and power. Germany was a terrible nation in all senses until Hitler came along and turned Germany into a country capable of world domination. His methods may have been heartless and ruthless but they were effective nonetheless. But I think that despite being a great leader, Hitler was a terrible person. He killed Jews, gypsies, homosexuals, the physically and mentally disabled, even though it was to make Germany look strong, some people hated him because of it and he was seen as a bad leader, but I think doing that made him a bad person, not a bad leader. So overall I think Hitler was a good leader in terms of running Germany, but he was a terrible person due to his heartless methods.