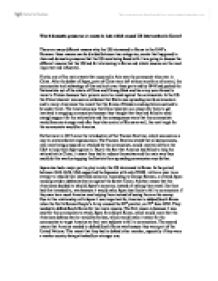 Was it domestic pressures or events in Asia which caused US intervention in Korea?

Was it domestic pressures or events in Asia which caused US intervention in Korea? There are many different reasons why the US intervened in Korea in the 1940's. However these reasons can be divided between two categories, events that happened in Asia and domestic pressures that the US were being faced with. I am going to discuss the different reasons that the US had for intervening in Korea and which reasons are the most important and influential. Firstly, one of the main events that occurred in Asia was the communist take over in China. After the defeat of Japan, parts of China were left without any form of control, the communists took advantage of this and took over these parts and by 1949 had pushed the Nationalists out of the whole of China and Chiang-Shek and his army were forced to move to Taiwan because their powers were too weak against the communists. In the US the China takeover was seen as evidence that Stalin was spreading world communism and to many Americans this meant that the forces of freedom and capitalism seemed to be under threat. ...read more.

would be broken, which would make it easier for the communists to target America as their next subjects to fall to communism. The second reason that America needed to defend South Korea was because they were part of the United Nations. This meant that they had to defend other member, especially if they were a weaker country being attacked by a stronger one. At this time, trade was very important because capitalist countries could not keep trading with a neighbouring country if they had fallen to communism. Therefore it was important to keep South Korea capitalist so that Japan still had someone to trade with and to stop Japan from having to trade with communist countries and becoming friendly with them. I believe that the main event that occurred in Asia which led to the US intervention was China's fall to communism because this led to other events taking place. For example, if China had not fallen to communist rule it would mean that America had followed the Truman Doctrine properly because they were giving aid to a country that needed to defend itself from communism. ...read more.

He stated the he believed the only way to contain communism and safe guard us interest was by a hard-line approach towards the Soviets. This meant that America had to attack and fight hard against the Soviets in order to contain them. By intervening in Korea it meant that they were directly against the Soviets and protecting American interests as well. The final domestic pressure was from the China Lobby. They were a powerful group of media barons, conservative politicians and other long-time supporters of the Nationalist government. They believed that Truman did not do as much as he could to prevent the communist takeover in China, especially since he stopped paying them money every year. This is an example of how an event in Asia caused domestic pressures. Truman would want to help Korea because he would not want to be seen as a failure in America, especially because it might effect his future as president. To conclude I believe that events in Asia caused domestic pressures. This is because whilst the communists were slowly taking over parts of China, the people in America feared that they were moving closer to them, therefore this would cause more pressure because Truman knew that he had to stop the communists and protect the American people. ?? ?? ?? ?? ...read more.