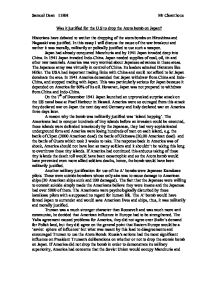 Was it justified for the U.S to drop the Atom bomb on Japan?

Was it justified for the U.S to drop the Atom bomb on Japan? Historians have debated to wether the dropping of the atom bombs on Hiroshima and Nagasaki was justified. In this essay I will discuss the cause of the war breakout and wether it was morally, militarily or polically justified to use such a weapon. Japan had already conquered Manchuria and by 1941 Japan invaded deep into China. In 1941 Japan invaded Indo-China. Japan needed supplies of coal, oil, tin and other raw materials. America was very worried about Japanese advances in these areas. The Japanese army was virtually in control of China. Its leaders admired Dictators like Hitler. The USA had important trading links with China and could not afford to let Japan dominate the area. In 1941 America demanded that Japan withdraw from China and Indo-China, and stopped trading with Japan. This was particularly serious for Japan because it depended on America for 80% of its oil. However, Japan was not prepared to withdraw from China and Indo-China. On the 7th of December 1941 Japan launched an unprovoked surprise attack on the US naval base at Pearl Harbour in Hawaii. America were so outraged from this attack they declared war on Japan the next day and Germany and Italy declared war on America three days later. A reason why the bomb was militarily justified was 'island hopping'. ...read more.

So perhaps the dropping of the bomb prevented a greater war with Russia, this meant the bomb was politically justified. The Japanese captured 14,000 P.O.W's in the first few months of the war and had completely disregarded the guidelines set by the Geneva convention in their treatment of the prisoners. POW's that were returned to America after the war averagely weighed less than 100 pounds and the conditions they had to live in were disgraceful. This kind of action towards POW's by the Japanese only gave America more of an insight in to how 'inhuman' they were and so the dropping of the bomb of these 'animals' who have killed allied and American soldiers is morally justified. Despite realising there military situation the Japanese showed no sign of giving up. In fact all the evidence indicates that they were preparing for a massive and stubborn defence of there islands. Also, the invasion of Japan would have had big effects of America's economy because it was feared an invasion of Japan may cost too much. If it is possible then the logical conclusion is to keep all your infantry in their barracks and annihilate your enemy 'en masse'. That way any war could be reduced to a day or two and allied casualties eliminated all together. Truman stated in his diary about the warning to be given ("we will have given them a chance") ...read more.

The Japanese were willing to accept nearly everything, accept a surrender that would include removing the Emperor as the seat of all power. When America dropped the first bomb they gave Japan no chance to surrender and proceeded to drop the second bomb. Japan would almost have certainly surrendered after assessing the damage of the first bomb, this proves to dropping of the bomb to be seriously morally unjustified because the Suzuki cabinet were seeking to surrender when it was dropped. Racism towards the Japanese was profound. Americans totally de-humanised them. This makes one wonder if America, under equivalent circumstances, would have been able to use the bomb on the Germans. The deliberate targeting of a civilian population is always a war crime. It is not permitted even if it is believed to bring victory nearer. If allied troops had systematically made their way through the streets of Hiroshima with flamethrowers and incinerated every man, woman and child in sight, who would attempt to justify such a war crime? But because the bomb makes a distance, literally, between cause and effect, agent and action, guilt is denied. If you have a terrible weapon in your hand, the morality of using it should demand that you not consider using it until you are in extremis. Was America in Extremis? In my opinion they were not. They had one the European war, were ahead of the game in men and material and Russia was ready to enter the war against Japan 1463 words Samuel Dean 11BH Mr Cleanthous ...read more.