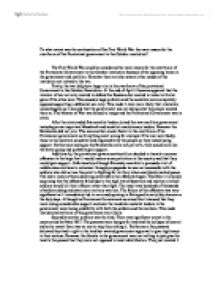 Was it the continuation of the First World War the main reason for the overthrow of the Provisional government in the October revolution?

This outraged the Liberals as they thought it would be the first step towards the break-up of Russia. This problem combined with the problem of the army and the land meant that a huge group of people were upset/angry by the decisions of the government. This was potentially a great problem especially if the soldiers, peasants, and the national minorities united. Fourthly the deteriorating economic situation in Russia was another reason for the overthrow of the Provisional government in the October revolution. Food shortages, unemployment, and high prices were a huge factor in bringing about the February revolution. This meant that if these problems carried on there was likely to be a second revolution. Workers were affected hugely by this as the shortages of fuel and raw materials led to factories cutting output or closing or laying off work, this led to inflation. Also food shortages were a problem as grain was not getting in from the countryside and the peasants were being extremely uncooperative. The governments sent out requisitioning brigades to the countryside to get grain however this just made the peasants more hostile. Furthermore as all the resources were channeled to the army as the war was still going on, disagreements between workers and employers increased. ...read more.

or a 'main reason' that led to the overthrow of the Provisional Government in the October revolution because it was many factors combined that resulted in the revolution. There was a revolution because so many groups (workers, soldiers, peasants, and national minorities) were united under the leadership of the Bolsheviks to fight and overthrow the government. The war was not the main reason however it was a significant reason as it could be argued that if there had been no war that there may not have been as many food shortages as the peasants who were previously soldiers could have returned back to the country and grown more crops. Also it could be argued that the war was the main reason for conflicting opinions in the government anyway and without a united government the provisional government was doomed from the beginning. However many of the other reasons such as the Kornilov affair could be said to have been the main reason as maybe if it hadn't happened Kerensky would not have lost so much support. So I think that the continuation of the war was quite significant in causing the downfall of the Provisional Government however it was not the main reason as without all of the other factors I doubt that the revolution would have happened at that time. ...read more.