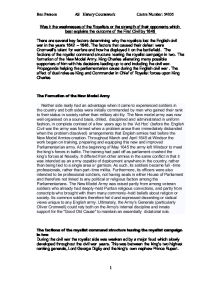 Was it the weaknesses of the Royalists or the strength of their opponents which best explains the outcome of the First Civil by 1646 There are several key factors determining why the royalists lost the English civil war in the years 1642 - 1646. The factors that caused their defeat were Cromwell's talent for warfare and how he displayed it on the battlefield. The factions of the royalist command structure tearing the royalist campaign in two. The formation of the New Model Army. King Charles alienating many possible supporters of him with his decisions leading up to and including the civil war. Propaganda helping the parliamentarian cause during the English civil war. The affect of dual roles as King and Commander in Chief of Royalist forces upon King Charles The Formation of the New Model Army Neither side really had an advantage when it came to experienced soldiers in the country and both sides were initially commanded by men who gained their rank to their status in society rather than military ability. The New model army was now well organised on a sound basis, drilled, disciplined and administrated in uniform fashion, in complete contrast of a few years ago to the 'Ad Hoc' (before the English Civil war the army was formed when a problem arose then immediately disbanded when the problem dissolved) ...read more.

Rupert himself is said to have coined the name "Ironside" for Cromwell, which became popular with the army and was extended to his troopers. Cromwell also became increasingly critical of the leadership of Manchester himself, and denounced him before the House of Commons in November 1644 for his unwillingness to take decisive action against the Royalists. A leading supporter of the Self Denying Ordinance Act ,1644, Cromwell was one of the few Members of Parliament exempted from resigning his commission in the army under its terms. He was officially appointed lieutenant-general of horse under Sir Thomas Fairfax in the New Model Armyjust before the decisive Parliamentarian victory at Naseby in June 1645, during which Cromwell routed Langdale's Northern Horse and rallied the Ironsides for a charge against the Royalist infantry that decided the outcome of the battle. Despite having no military training or experience prior to 1642, Cromwell was generally regarded as the greatest soldier in England by the time he and Fairfax received the surrender of Oxford in June 1646. On occasion Cromwell's contribution to Parliament's victory's during the First Civil War were exaggerated by Parliamentarian propaganda. Not until the great battles of Marston Moor (1644) and Naseby (1645) did he have a decisive effect on the fortunes of the war, and even in the case of Marston Moor, his importance is disputed. ...read more.

Charles wavered easily in the direction of his side's war effort. Managing a war fought against people who were your own subjects but who were following traitors was difficult and especially so for someone lacking self confidence. Often his reliance on stronger men meant that inept commanders had a direct hand in the running of the war effort. This reliance became one of the Commander in Chief of the Royalist forces and the King of Great Britain major predicaments. In my opinion all of the above points helped in the victory of the parliamentarians during the civil war. But no single factor can be said that was the main point for the way in which the civil war turned out. An example of this is in saying that if it was not for Cromwell the parliamentarians would have lost the civil war; I believe this to be untrue as the parliamentarian side would have found another person to take his place who would have been as successful as Cromwell was if not more. The same can be said for the factors causing the defeat of the royalist side no one factor can be blamed for there defeat. In essence the defeat of the royalist side cannot be blamed on one point but more of a snow balling effect of small problems and hindrances that did not affect the royalists to much in the short term but proved fatal in the long term scheme of things during the civil war. ...read more.