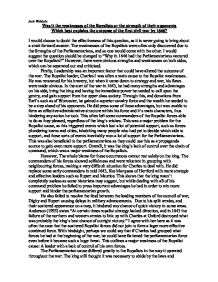 Was it the weaknesses of the Royalists or the strength of their opponents which best explains the outcome of the first civil war by 1646?

Jack Webdale Was it the weaknesses of the Royalists or the strength of their opponents Which best explains the outcome of the first civil war by 1646? I would choose to doubt the effectiveness of this question, as it is never going to bring about a strait forward answer. The weaknesses of the Royalists were often only discovered due to the Strengths of the Parliamentarians, and so one would come with the other. I would suggest the question should be changed to "Why in 1646 had the Parliamentarians vectored over the Royalists?" However, there were obvious strengths and weaknesses on both sides, which can be separated out and criticised. Firstly, Leadership was an important factor that could have altered the outcome of the war. The Royalist leader, Charles I was often a main cause to the Royalist weaknesses. He was renowned for his bravery, but when it came down to strategy and war, his flaws were made obvious. In the start of the war in 1643, he had many strengths and advantages on his side, bring the king and having the immediate power he needed to call upon the gentry, and gain support from the upper class society. Through this, and donations from Earl's such as of Worcester, he gained a superior cavalry force and the wealth he needed to be a step ahead of his opponents. ...read more.

Firstly, men were paid to fight for the first time in the war, or for the most part of it. This was unlike the Royalist structure that relied on the Gentry leaders to control his own army and supply its needs. Paying men to fight was expensive, however, and took a lot of wealth out of the Parliamentarian cause. A price that the Royalists never had to pay due to their self-supportive force. The Leadership of the Parliamentarians was Superior in that it promoted on merit, almost guaranteeing effective leaders or strategists of war could make the right decisions and do a better job than a rich, high class noble with no such skills as in the Royalist structure. The Parliamentarians went so far as to announce no MP was to be in command of forces. They did make exception with Oliver Cromwell, as he had proved already his ability on the field. This isn't a weakness to the Royalists however, by not adopting these tactics. I feel that if they did so, it would cause uproar in the forces ranks and leaders. The Royalists had many High-class citizens supporting it, and the rich with handed down estates. These folk already had power due to their status, and if a working class citizen, who was below him in the social structure, took it away from him it would cause much more problems than benefits. ...read more.

People who were indecisive looked out for all this propaganda hoping it would help them make up their mind of which side to support. But often all this propaganda served to confuse. They contradicted each other and often made people turn to localism or not to choose a side at all. Lady Sussex wrote, "Both sides promise so fair, that I cannot see what it is they should fight for." Thus I would say that propaganda was a strength and a weakness to both sides. Parliament, however were more successful at it, basically because they had control of the central propaganda area - London. This propaganda often destroyed Royalist morale, and humiliated the king. The parliamentarian, for example, managed to intercept a collection of papers in which were letter to and from the Irish and the king. They indicated Charles's Ruthlessness and was a devastating source for their propaganda campaign. In Conclusion, It was both the Strengths of the Parliamentarians and the weaknesses of the royalists that gave victory to the parliamentarians. I would choose to say that it was more the parliaments strengths, as they had control of London and it's masses, along with the propaganda centre. Its structure was also more organised, and its leadership was superior to the Royalists. We cannot forget, however, that the Royalists also had many strengths as well as weaknesses. The main cause of the Royalist failure was the king, and his failure to press his advantages at the beginning of the civil war. ...read more.