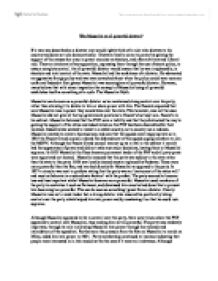 Was Mussolini an all powerful dictator?

Was Mussolini an all powerful dictator? If a man was described as a dictator one would rightly think of a ruler who dictates to his country and does not rule democratically. Dictators tend to come to power by gaining the support of the masses but once in power exercise an absolute, and often arbitrary and illiberal rule. They are intolerant of any opposition, repressing them through the use of secret police, to ensure complete control. An all-powerful dictator would ensure that he was irreplaceable, in absolute and total control of the state. Mussolini had the semblance of a dictator. He advocated an aggressive foreign policy and was even consulted about when the police could wear summer uniforms! Indeed at first glance Mussolini was seemingly an all-powerful dictator. However, many believe that with closer inspection the concept of Mussolini being all-powerful establishes itself as something of a myth- The Mussolini Myth. Mussolini can be seen as a powerful dictator as he maintained strong control over his party, rather than allowing it to dictate to him or share power with him. The Fascists expected that now Mussolini was in power they would take over the state. This however, was not the case. Mussolini did not give all the top government positions to Fascist's but kept non- Fascist's in his cabinet. ...read more.

Party membership continued to increase indicating that people were interested in it; this would not be the case if it were an irrelevance. Although Mussolini did not fill his cabinet with Fascist's many of the top jobs were taken by Fascist's. It is debatable however as to whether these Fascist supporters truly believed in the Fascist ideology or simply wanted to join because they knew they would have better career prospects. The fact that Mussolini needed someone like Farinacci to centralise the party meant that he was not all- powerful. Such a dictator would have been able to do so himself. His dismissal of Farinacci also shows Mussolini's power as being limited, as one would expect a dictator to have someone so outspoken and powerful assassinated to protect his position. Mussolini held several ministerial positions and gave others to sycophants whom he knew posed no threat to him. Again a true dictator would not need to hold so many positions as he would be able to trust and command his men. Mussolini also failed to ensure that the party was weak enough so that it could not overthrow him. Although the Fascist Grand Council appeared to be less important and significantly weak it still managed to sack him as leader of the party in 1943. ...read more.

However, this could also be interpreted another way. Perhaps Mussolini had no desire to be oppressive but merely elevate the position of the Italian people, or perhaps it was simply because Mussolini was indeed weak and knew that he could not get away with repression to that extent particularly with the elites still in place. There is some implication that the regime was poplar rather dictatorial. People were informing and joining Fascist organisations such as the OND and the PNF. Mussolini set up mass leisure organisations to get the people active. Many joined and participated. One explanation for this is that people were satisfied and impressed by the social and economic successes brought about by Mussolini. Although it may seem that people were happy with the regime and felt apart of it agreeing with its ideology, it could be that people wanted to take advantage of free entertainment. Therefore perhaps Mussolini was not a dictator but a leader who had won the conditional support of the people. Mussolini was clearly not an all-powerful dictator. He failed to secure his position fully by allowing people who had the power to overthrow him to remain in their places- the king, the army and the church. Furthermore, he was not fully in control of the party, although he held a substantial amount. Mussolini then, was not a dictator but nor was he a democratic leader. He had the semblance of an all powerful dictator but managed only to be an authoritarian leader. ...read more.