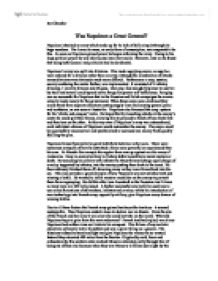 Was Napoleon a Great General?

Was Napoleon a Great General? Napoleon inherited an army which made up for its lack of skills simply through its huge numbers. The Levee �n mass, an early form of conscription, was responsible for this. As soon as Napoleon gained power he began reforming the army. Owing to his large political power he was able to pass laws very easily. However, later on he found that being both General and politician had its drawbacks. Napoleon's army was split into divisions. This made supplying easier, as supplies were ordered for a division rather than an army, although the coordination of attacks across divisions was obviously made more difficult. Furthermore a corp. system, seemly confusing the matter further, was implemented. It consisted of 3 infantry divisions, 1 cavalry division and 46 guns. One corp. had enough firepower to survive by itself and several could spread out to forage for greater self-sufficiency. Foraging was so successful for Napoleon that in the Prussian and Polish campaigns the armies actually made money for the government. When these corps were combined they could attack from separate directions cutting supply lines and causing general panic and confusion, as was seen at Austerlitz. ...read more.

From the size of the French and her army it was clear she could not take on the world. What did Napoleon hope to gain from this next endeavour? French land had tripled, was it true Napoleon had neither aims nor limits to his conquest. This failure of any realistic objectives ultimately led to his defeat and was a grave failing as a general. The Russians refused to stand and fight and give Napoleon the victory he so wanted. Instead they retreated 400 miles from the frontier. Crippled by cold, fever and exhaustion the few soldiers who reached Moscow retreated, partly through fear of being cut off but also because when they saw Moscow in flames (set alight by the Russians to prevent it falling into French hands). This campaign was not just a loss but a disaster. The hundreds of thousands of men now dead had been drawn from the Spanish campaign. Napoleon's failure to secure the Spanish front before opening another front, achievable with his overwhelming numbers, cost him dearly. Subsequently, at the Battle of Leipzig, some of Napoleon's faults were further revealed. ...read more.

In conclusion, Napoleon was certainly a great battlefield tactician. Examples of his genius could be seen at Aboukir, where he used the sea as his ally, or later when he won decisive victories such as at Jena Auerstadt and Austerlitz where, in hilly country, he could feint, wheel, surprise and outflank. But gradually his tactics became predictable and when battles were forced onto flat plains (Leipzig) or attacking uphill (Waterloo) every movement could be seen and so his advantages were lost. More importantly, Napoleon's ability to handle the more strategic aspects of the war, as opposed to deploying his troops on the specific battlefield, was sometimes suspect. Although he tried not to open up more than one front at a time or fight a large coalition of allied countries, he can be criticised for being drawn into an attack on Russia before Spain's resistance had been completely silenced - his superiority in numbers was significantly weakened as a consequence. Maybe Napoleon's true flaw was that he lacked any real aims in prosecuting the war - as he opened up new fronts with no apparent limit he simply increased the numbers of enemies determined to defeat France. Ian Chandler ...read more.