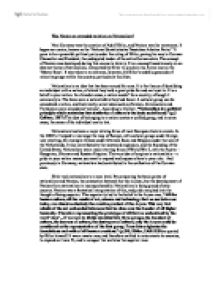 Was Nazism an extended variation on Nationalism?

Was Nazism an extended variation on Nationalism? Nazi Germany was the creation of Adolf Hitler, and Nazism was his movement. It began as a union, known as the 'National Sozialistische Deustches Arbeiten Partei." It grew to be a powerful political party under the ruling of Hitler, paving his way to German Chancellor and President, the undisputed leader of the entire German state. The concept of Nazism was developed during this course in history. It is a concept based loosely on an abstract theme of nationalism, interpreted by Hitler to proclaim his Ayran race as the 'Master Race'. It was taken to an extreme, however, by Hitler's sadistic genocide of minority groups within the country, particularly the Jews. Nationalism is an idea that has been around for eons. It is the theory of identifying an individual with a nation, of which they hold a great pride for and are loyal to. It is a belief in your nation. In a broader sense, a nation needn't be a country, although it commonly is. ...read more.

This very fact admits of the not unfounded inference that he alone was the founder of all higher humanity. Therefore representing the prototype of all that we understand by the word 'man'...If we were to divide mankind into three groups, the founders of culture, the bearers of culture, the destroyers of culture, only the Aryan could be considered as the representative of the first group. From him originates the foundations and walls of all human creations." (p.290, Hitler, 1969/1939) as quoted by Hitler himself. It was a master race, and therefore entitled to exterminate its enemies, to expand as it saw fit, and to conquer the world as the superior race. This pride in the nation theory led to the idea of "Social Darwinism". This is a far-fetched interpretation of Darwin's theory of evolution, which states humans are the most evolved creatures on earth. That was eagerly changed to suit Hitler's purposes by the Nazis. "By suggesting that man had evolved from more primitive creatures, and that some races had evolved further than others, it provided racism with a scientific mask." ...read more.

This theory was blatantly ignored in some situations, however. One example was in 1936. Hitler and the Japanese signed the 'German-Japanese Agreement and Supplementary Protocol' on November 25th. Hitler realised his plans to conquer the world could not be realised without the help of others, and after the signing of this pact, he proclaimed the Japanese to be "honourary Aryans." This shows the fanaticism of Hitler, as he would relinquish his Aryan beliefs whilst he used the Japanese to accomplish his overall conquest of the world. In 1934, Hitler became the F�hrer of the German state. "One people, one country, one leader" was the common phrase of the time. From this moment on, Germany was run by a totalitarian dictator. What may have begun as nationalist ideas were extremely construed by one of the most influential people in the history of today's society. Aryan superiority, anti-Semitism, lebensraum and social Darwinism, all important ideologies in the Nazism movement came directly from the basic nationalist ideals of society. The same ideals that unified Germany, Italy and other countries, and freed the people of various countries under oppressive rule created the most feared movement in modern history. Liz Ellison ...read more.