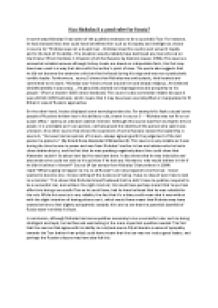 Was Nicholas II a good ruler for Russia?

﻿Was Nicholas II a good ruler for Russia? In some ways Nicholas II had some of the qualities necessary to be a successful Tsar. For instance, he had characteristics that could have benefitted him such as his loyalty and intelligence, shown in source 12, ?Nicholas was not a stupid man ?Nicholas loved his country and served it loyally and to the best of his ability?The situation would probably have destroyed any man who sat on the throne.?(From Nicholas II, Emperor of All the Russians by Dominic Lieven, 1994.) This source is somewhat reliable because although history books are based on indisputable facts, this fact may have been used in a way that sides with the author?s point of view. ...read more.

Although this source was from during his time in power, it is unreliable as it?s an opinion, not factual and the identity of the person who said it was unknown. One other source that shows the scepticism of some Russians toward his leadership is source 4, ?He never had an opinion of his own?always agreeing with the judgement of the last person he spoke to.? (By Grand Duke Alexander Mikhaeilovich). This source is very reliable as it was during the time he was in power and was from Nicholas? brother in law and advisor who he had a close relationship to, and the fact that he was speaking negatively about him could show that Alexander couldn?t lie about how bad he may have been. ...read more.

While this source is very reliable, the fact that it?s a diary could mean that it was written with the slight intention of having others see it, which would have meant that Nicholas may have wanted others to feel slightly sympathetic towards him and to see that the potential downfall of Russia wasn?t entirely his fault. In conclusion, although Nicholas had some qualities necessary to be a successful ruler such as being intelligent and loyal, he had few and was lacking in the more important qualities needed. The fact that the sources that agree with his ability to rule (and source 14) all denote a sense of sympathy towards the Tsar (rather than pride) could have meant that the tsar was not truly a good leader, and perhaps the Russian citizens may have also felt this. ...read more.