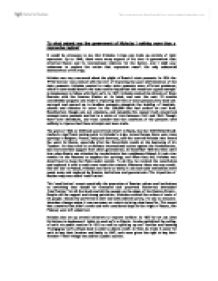 Was Nicholas's I Government Really Percieved as an Oppreive Regime

To what extent was the government of Nicholas I nothing more than a repressive regime? It would be erroneous to say that Nicholas I reign was made up entirely of rigid repression. Up to 1848, there were many aspects of his time in government that reformed Russia and its international relations for the better, and I shall now endeavour to explore the notion that repression wasn't the only substantial characteristic of his reign. Nicholas was very concerned about the plight of Russia's state peasants. In 1836 the 'Fifth Section' was created with the aim of improving the poor administration of the state peasants. Nicholas wanted to make state peasants more efficient producers, which in turn would benefit the state and he hoped that this would set a good example to landowners to follow with their serfs. In 1837, Nicholas started the Ministry of State Domains with the German Kiselev at its head, and over the next 18 months considerable progress was made in improving the lives of state peasants. New land was surveyed and opened up to landless peasants alongside the building of hospitals, schools and churches to cater for the 200,000 that had settled on new land. ...read more.

This industrial age rendered serfdom and autocracy virtually inappropriate. Despite these reforms, Nicholas I reign is often associated with fierce repression, especially in the last seven years of his government, from 1848 to his death in the Crimean War in 1855. Rebellions were sweeping across Europe in 1848 and Russia being autocratic had strong reasons to fear revolts. Such was Nicholas's fears about the fragility of Russia being exposed that he even asked Queen Victoria for help in protecting Russia against these dangerous movements, she predictably declined. Nicholas's fears were also heightened by internal events. There was a cholera epidemic and the worst crop failure in 30 years, which led to bread doubling in price. Nicholas once again took firm and decisive action. He moved 400,000 troops to the western borders to prevent the spread of anarchy and another secret committee was set up to root out any subversive influence. The actions of the Third Section had effectively turned Russia into a police state. In 1849 it discovered the secret organised opposition 'The Petrashevsky Circle'. Petrashevsky was a clerk in the foreign ministry who was an educated and middle class civil service. ...read more.

During the war Nicholas contracted pneumonia and his refusal to rest coupled with a strenuous programme of inspections resulted in his death on the 18th of February 1855. One commentator reported that his death concluded: 'A long and, one must admit, a joyless page in the history of the Russian Empire has been written out to the last word'. Rigid repression did not fully grip the Russian Empire until 1848, but by then Nicholas had already caused a vast amount of damage to the country and he insisted on giving it no positive or new direction when it so desperately needed it. The repression was born out of fear of new ideas and his belief in the intrinsic values of the old ways and system. His unshakable belief in autocracy and tradition prevented Russia from developing. Though his government did preside over some positive reforms, and internationally they did have some success and built up good relations with other countries, internally Nicholas effectively starved his own people of any freedom of speech or thought, and that is why many people consider the government of Nicholas I to be nothing more than a repressive regime. ...read more.