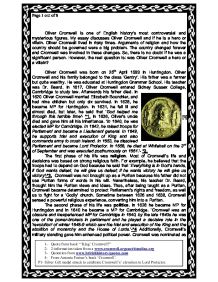 Was Oliver Cromwell a hero or a villain?

Oliver Cromwell is one of English history's most controversial and mysterious figures. My essay discusses Oliver Cromwell and if he is a hero or villain. Oliver Cromwell lived in risky times. Arguments of religion and how the country should be governed were a big problem. The country changed forever and Cromwell was involved in these changes. So, there is no doubt if he was a significant person. However, the real question is: was Oliver Cromwell a hero or a villain? Oliver Cromwell was born on 25th April 1599 in Huntingdon. Oliver Cromwell and his family belonged to the class 'Gentry'. His father was a farmer but quite wealthy. He was educated at Huntingdon Grammar School. His teacher was Dr. Beard. In 1617, Oliver Cromwell entered Sidney Sussex College, Cambridge to study law. Afterwards his father died. In 1620 Oliver Cromwell married Elizabeth Bourchier, and had nine children but only six survived. In 1628, he became MP for Huntingdon. In 1631, he fell ill and almost died, but later, he said that 'God helped me through this terrible time'- *1. In 1636, Oliver's uncle died and gave him all his inheritance. 'In 1640, he was elected MP for Cambridge. In 1642, he raised troops for Parliament and became a Lieutenant general. In 1649, he supports trial and execution of King and also commands army to crush Ireland. In 1653, he dissolved Parliament and became Lord Protector. In 1658, he died at Whitehall on the 3rd of September and was executed posthumously on 1661.'- *2. The first phase of his life was religion. Most of Cromwell's life and decisions was based on strong religious faith. For example, he believed that the troops had to depend on God because he said that 'Everything is in God's hands, if God wants defeat, he will give us defeat; if he wants victory he will give us victory'-*3. Cromwell was not brought up as a Puritan because his father did not use Puritan forms of words in his will. ...read more.

In 1649, the Irish Catholics lead a rebellion against Cromwell. He and the Parliamentary army were sent to Ireland to stop them. Cromwell and his army won battles and restored order, and the army of Drogheda surrendered when hunger forced them to. This is seen by many historians to be a heroic thing to have done to save Parliament and to prevent Charles II from taking over. The Catholics were Cromwell's enemies anyway and had been continually revolting since 1641. Cromwell believed he had no choice - he was sent to Ireland by Parliament for a duty and it had to be carried out. He thought he also had God on his side at the battle of Drogheda. After this, in 1657, some MP's asked him to be King. Cromwell took time for his decisions, but he felt that God, himself had destroyed the title. This shows us that Cromwell was a very godly person. One hundred officers told Cromwell that it was not pleasing to his army, because it was dangerous to him and it could make way for Charles Stuart. Also, General Fleetwood and Colonel Desborough that those offered him the crown were Charles Stuarts' friends. Cromwell rejected the offer, and in my opinion he did a very outstanding thing that no one probably has ever done. When Cromwell was Lord Protector of the Kingdom, England was very peaceful and became godlier. This shows us he was a very good King. In some ways, this was believed to be a positive step forward for Cromwell. Cromwell nobly turned down the crown as he knew his army would not forgive him for doing this after they fought for a democratic society. At this time, the country was in desperate need of a successful leader as the many previous methods of ruling and parliament had all failed in one way or another. This desperate time called for the desperate measure of Cromwell being appointed Lord Protector. ...read more.

Cromwell was also known to smoke and drink even though he banned music, singing, gambling, smoking and drunkenness. This shows that he is not a very godly person. Cromwell was a villain because of his changing and inconsistent beliefs and aims. He firstly set out to eliminate the Kings advisors, but ended up trying to dissolve the monarchy by executing the King. After this, he executed the Levellers, a group who had supported him all the way through the civil war. He then became the Lord Protector of England, which very closely resembled the King's position anyway. After making Britain Puritan, being very unpopular with the public, he betrayed the Puritan principles and beliefs by living in luxury. This illustrates Cromwell becoming power mad and turning into an English Dictator, betraying Parliament and constantly changing his beliefs In my opinion, I think Cromwell was a hero. He was extremely godly and ruled the Kingdom very well as England was peaceful. Cromwell was a great man who had helped to make Britain stronger and religious. Cromwell, as a ruler made mistakes, but had many successes and always did his country the best. He might have been a complicated man but was very godly. He thought a lot about his decisions and came out with the best. As you can see, in every situation, he associated God in some way and made us understand he was a very good man. He always struggled to discover God's will for him and the country. Cromwell was a modest man, as you can see one of his famous quotes he ever said-'I desire you would use all your skill to paint my picture truly like me ... warts and everything as you see me.' Oliver Cromwell was a wonderful man, he helped to win the Civil War. In conclusion, I think Oliver Cromwell is a HERO. The websites I used were: www.british-history.com, www.gospelcom.net, www.bbc/history.com, www.cromwell.argonet.com, www.antoniafraiser.com, www.olivercromwell.org, 'King' Cromwell?' and 'Societies in change'. Page 1 out of 8 ...read more.