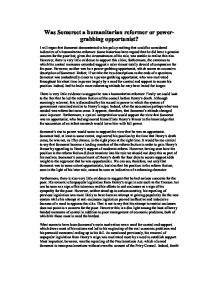 Was Somerset a humanitarian reformer or power-grabbing opportunist?

Was Somerset a humanitarian reformer or power-grabbing opportunist? I will argue that Somerset demonstrated in his policy nothing that could be considered indicative of a humanitarian reformer. Some historians have argued that he did have a genuine concern for the poor but, given the circumstances of his rule, was unable to realise this aim. However, there is very little evidence to support this claim; furthermore, the extremes to which his control measures extended suggest a ruler almost totally devoid of compassion for the poor. However, neither was he a power-grabbing opportunist, which seems an excessive description of Somerset. Rather, if we take the two descriptions as the ends of a spectrum, Somerset was undoubtedly closer to a power-grabbing opportunist, who was motivated throughout his short time in power largely by a need for control and support to secure his position. Indeed, had he had a more reforming attitude he may have lasted for longer. There is very little evidence to suggest he was a humanitarian reformer. Firstly we could look to the fact that he led the reform faction of the council before Henry's death. Although seemingly relevant, this is discredited by his record in power in which the system of government remained similar to Henry's reign. ...read more.

That is not to say that his attempt to restrict enclosure does not point to a concern for the poor. However this is a dim light among the host of heavy handed measures of control in addition to poor management of economic problems, both of which hit those most in need the hardest. What seems to have been Somerset's main motivation was a need for control and support, which drove most of his actions and led to his neglecting of the real economic problems and his paranoid measures leading up to his fall. As mentioned previously, his removal of unpopular legislation from Henry's reign was motivated more by a need to establish support. Most important, however, was the repealing of the Proclamations Act, which allowed Somerset to issue proclamations without even the consent of the Privy Council. Indeed, Smith argues that during Somerset's rule "proclamations posed their greatest threat to the supremacy of parliamentary statutes." 1 Alan Smith paints a picture of a government in which Somerset ruled by his own prerogative through the use of proclamation (the average per year went from six to nineteen), refusing to take advice and seen by his council as arrogant. ...read more.

However, we should not extend this point too far, many of the acts, such as the Vagrancy Act and repealing of proclamations, were not at a time when Somerset was in a state of desperation. Moreover, the discontent was to a large extent Somerset's own doing. This and his failure to deal with it in a measured way serve as further evidence to support the arguments made here. Therefore, it is a criticism that should be considered but which does not damage the main substance of the argument, rather, forces us to make a more measured assessment of Somerset's character in light of his situation. Therefore, Somerset, although there is a little evidence to suggest he was concerned for the poor, was not a humanitarian reformer. He was motivated throughout his rule by a need to secure his position seen principally by his use of his new powers of proclamation and later acts. He did not recognise the problems people faced; rather, he used harsh methods to attempt to control the people. Given the state of desperation he was in, Somerset's character should not be seen as power grabbing, which implies a despotic rule, instead he merely saw that securing his position and controlling dissent was essential in his rule. 1 Smith, A.G.R., The Emergence of a Nation State, p.68 ...read more.