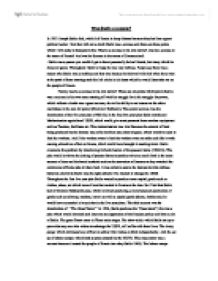 Was Stalin a success?

Was Stalin a success? In 1953 Joseph Stalin died, which left Russia in deep distress because they had lost a great political leader. I feel that with out a doubt Stalin was a success and there are three points which I will study to help prove this: Was he a success in his own terms?, was he a success in the terms of Russia? And was he Success in the terms of Communism?. . Stalin was a person you couldn't get to know personally he had friends, but many which he chose to ignore. Throughout Stalin's Reign he was very ruthless. People say there was a reason why Stalin was so ruthless and that was because he beloved wife died when they were at the peak of there marriage and this left a hole in his heart which he would later take out on the people of Russia. Firstly, was he a success in his own terms?. There are six points which prove that he was a success in his own terms starting off with his struggle for is his struggle for power, which without a doubt was a great success, due to his ability to out maneuver the other candidates in the race for power (Zinoviev/ Bukharin). ...read more.

Stalin Begins to take control of eastern Europe in 1945- 48, Stalin turns Europe into Communists, Whilst gradually chopping off opposing countries, and things that will bring the countries down . In 1953 Joseph Stalin died of natural causes, he was at the peak of his power. Even after his death he was perceived as the man who changed Russia. I feel that in Stalin's own terms I can official say that he was a success because every situation Stalin faced he always cam out on top. Secondly, was Stalin a success in his own terms?: in Russia's terms there are three points which prove him not to be a success. Firstly the Five-year plan. The five year plan never did much for the Russian workers , because the first five year plan concentrated on capital goods such as shoes clothes etc which was only good for yourself, which were not that important at that time in Russia. The other five Year plans concentrated on consumer goods such as coal, oil, railways and trucks etc which was good because it could help others. The five year plan also concentrated on military productions before during and after the war, which resulted in the workers being alienated from the system and there own productivity was low meaning that they didn't benefit from any thing that was being produced. ...read more.

In the terms of Communism Stalin was both a success and a failure. He was a success due to the fact he Transformed Russia into a Communist country, but whilst doing that he put a whole new meaning to the word communism. Stalin turned Communism into to a ruthless, brutal system, which would control the deaths of many innocent civilians. I have come to the verdict that all these reasons can be linked to prove Stalin to be a success For instance Stalin's strong character shows a lot of perseverance, which is linked with the great terror because the reason he launched the great terror was to put across the image of a strong character, and his strong character continued throughout his reign until he nearly surrendered to the Germans. Both the five-year plans and the collectivization can be linked because they both involve producing goods for a better Russia, these productivity was meet but it left the people of Russia with nothing to gain. Finally I feel that Stalin was too harsh towards the Russian people because he could have succeeded in transforming Russia by using a less brutal technique, For example Bukharin's plan were he motivates the workers and the peasants, whilst keeping a balanced productivity gain off there work. ...read more.