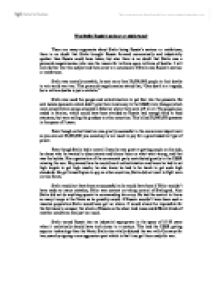 Was Stalin Russia's saviour or misfortune?

Even though Stalin had a mental illness he was great at getting people on his side, he chose who he wanted to discriminate and blame them on what went wrong, and that was the kulaks. His organisation of the communist party contributed greatly to the USSR winning the war. He planned how he would work collectivisation and knew he had to set high targets to get high results, he also knew he had to be harsh to get such high standards. He got himself spies to spy on other countries, Stalin did not want to fight wars on two fronts. Stalin would not have been as successful as he would have been if Hitler wouldn't have made as many mistakes, Hitler was content on taking control of Stalingrad. ...read more.

Stalin turned Russia into an industrial superpower in the space of 15-20 years when it realistically should have took closer to a century. This lead the USSR getting superior technology than the Nazis. Stalin also vitally delayed the war with Germany for two years by signing a non aggression pact which in that time got them ready for war. From this evidence I can conclude that Stalin was a misfortune of the USSR. I can state this because Stalin killed over 20,000,000 people in his evil regime, and even though he won the war, I believe that anyone in charge of the USSR would have been able to overcome the Nazis. I believe that if Trotsky was at the helm he would have been able to the same kind of job Stalin without all the revolutionary tools and superior technology as he was more military minded. ...read more.