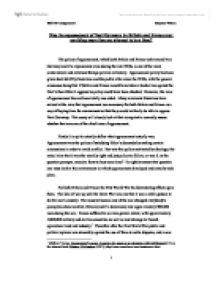 Was the appeasement of Nazi Germany by Britain and France ever anything more than an attempt to buy time?

Was the appeasement of Nazi Germany by Britain and France ever anything more than an attempt to buy time? The policy of appeasement, which both Britain and France took toward Nazi Germany and it's expansionist aims during the late 1930s, is one of the most controversial and criticised foreign policies in history. Appeasement policy has been given short shrift by historians and the public alike since the 1930s, with the general consensus being that if Britain and France would have taken a harder line against the Nazi's then Hitler's aggressive policy could have been checked. However, the view of appeasement has not been totally one sided. Many revisionist historians have arrived at the view that appeasement was necessary for both Britain and France as a way of buying time for rearmament so that they would militarily be able to oppose Nazi Germany. This essay will closely look at that viewpoint to correctly assess whether that was one of the chief aims of appeasement. Firstly it is apt to actually define what appeasement actually was. Appeasement was the policy of satisfying Hitler's demands by making certain concessions in order to avoid conflict. But was this policy motivated by ideology, the actual view that it was the morally right and just policy to follow, or was it, as the question prompts, merely a front to buy more time? ...read more.

The incoming Germans numbered approximately 60,000, yet the Army General Staff reported to the French government that in addition to that figure there were further 235,000 paramilitaries.3 Public opinion was also against intervention, as Bell states; "the almost unanimous view of the press on 8 March and the following days was to renounce the idea of war, or action of any kind."4 France was politically fragile at this time, with temporary government being lead by a widely renowned weak leader, Albert Sarraut. Any action taken would deem to be unpopular, especially as 1936 was an election year in France. This sets the scene for future French appeasement. The reaction of Britain to Hitler's remilitarisation of the Rhineland was indifference, and further highlights Britain's disinterest at this time in European matters, and as with the French the public and the press showed little interest in conflict with Germany over what was seen as 'their own back garden'. The remilitarisation of the Rhineland has been pointed out as being the key moment in European relations in the 1930s. Geoff Layton states that it was "the decisive turning point in European International Relations"5 in that it provided Hitler with a first real triumph of his Foreign Policy and it showed to him that Britain and France would not oppose Germany by force. ...read more.

The fear of German attack was foremost in the minds of the British politicians, and because of which the RAF was virtually given unlimited funds with which build up the air force, again this was further backed up by over estimates of the Luftwaffes strength. In conclusion, it would have to be said that the question of appeasement just being simply a policy with which to buy time is wrong. Appeasement started off with the clear aim to avoid conflict and preserve peace in Europe. It was only after Munich in 1938 that it also became a tool with which to buy time with which to build up military strength. However with that view in mind, it can also be said that appeasement was a failure. The time it bought for France wasn't enough, hence Germany's easy victory over her neighbour in 1940. Yet the opposite could be said for Britain, appeasement allowed the RAF to build up it's strength, with which it was able to defeat the Germans in the Battle of Britain. The time appeasement bought for the British aided it's survival, as the champion of appeasement Neville Chamberlain said in a letter to his sister in 1939: "they [the Germans] could not make nearly such a mess of us now as they could have done, while we could make much more of a mess of them. ...read more.