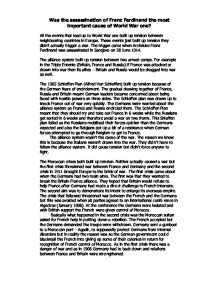 Was the assassination of Franz Ferdinand the most important cause of World War one?

Was the assassination of Franz Ferdinand the most important cause of World War one? All the events that lead up to World War one built up tension between neighbouring countries in Europe. These events just built up tension they didn't actually trigger a war. The trigger came when Archduke Franz Ferdinand was assassinated in Sarejavo on 28 June 1914. The alliance system built up tension between two armed camps. For example in the Triple Entente (Britain, France and Russia) if France was attacked or drawn into war then its allies - Britain and Russia would be dragged into war as well. The 1905 Schieffen Plan (Alfred Von Schieffen) built up tension because of the German fears of encirclement. The gradual drawing together of France, Russia and Britain meant German leaders became concerned about being faced with hostile powers on three sides. The Schieffen plan was drawn up to knock France out of war very quickly. The Germans were worried about the alliance system as France and Russia encircled them. ...read more.

The crisis that followed threatened war between the French and the Germans but this was avoided when all parties agreed to an international conference in Algeciras (January 1906). At the conference the Germans were isolated and with British support the French were given control of Morocco. Basically what happened in the second crisis was the Moroccan sultan asked for French help in putting down a rebellion. The French accepted but the Germans demanded the troops were withdrawn. Germany sent a gunboat to a Moroccan port - Agadir, to supposedly protect Germans from internal disorders but in reality the reason was so the German government could blackmail the French into giving up some of their colonies in return for recognition of French control of Morocco. As in the first crisis there was a danger of war and as in 1906 Germany had to back down and relations between France and Britain were strengthened. All of the major European powers spent a lot of money on arms as the graph shows. Kaiser Wilhelm the second - the emperor of Germany was very militaristic and was jealous of Britain because they had a large empire. ...read more.

Although there was no evidence to link Princip with the Serbian government, the Austrian government used Ferdinand's assassination as an excuse to present Serbia with an ultimatum. Serbia only agreed to 9 out of the 10 points of the ultimatum and so Austria declared war. Serbia asked Russia for help and so the Russians mobilised their troops on July 30 and then on July 31 Germany sent an ultimatum to Russia demanding that they suspend all warlike measures within 12 hours. Germany also sent an ultimatum to France demanding they stay neutral. Both France and Russia ignored these ultimatums and Germany declared war on Russia and as France was Russia's ally, they mobilised their troops. Germany demanded from Belgium the right to send troops through its territory so they could get to France. Belgium refused but Germany invaded anyway. On August 4 Britain sent an ultimatum to Germany at 11 am giving it 12 hours to withdraw from Belgium. Germany didn't and so at 11 pm Britain declared war on Germany. All these events were triggered by the assassination of Franz Ferdinand and so I would say that this was the most important cause of the first world war. ...read more.