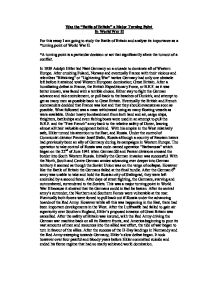 Was the &quot;Battle of Britain&quot; a Major Turning Point In World War II.

Was the "Battle of Britain" a Major Turning Point In World War II For this essay I am going to study the Battle of Britain and analyse its importance as a *turning point of World War II. *A turning point is a particular decision or act that significantly alters the turnout of a conflict. In 1939 Adolph Hitler led Nazi Germany on a crusade to dominate all of Western Europe. After crushing Poland, Norway and eventually France with their vicious and relentless "Blitzkrieg" or "Lightening War" tactics Germany had only one obstacle left before it attained total Western European domination; Great Britain. After a humiliating defeat in France, the British Expeditionary Force, or B.E.F. as it was better known, was faced with a terrible choice. Either stay to fight the German advance and risk encirclement, or pull back to the beaches of Dunkirk, and attempt to get as many men as possible back to Great Britain. Eventually the British and French commanders decided that France was lost and that they should evacuate as soon as possible. What followed was a mass withdrawal using as many floating vessels as were available. Under heavy bombardment from both land and air, cargo ships, freighters, battleships and even fishing boats were used in an attempt to pull the B.E.F. and the "Free French" army back to the relative safety of Dover, leaving almost all their valuable equipment behind. With his empire in the West relatively safe, Hitler turned his attention to the East, and Russia. ...read more.

It was also a huge propaganda victory for the British. After the fall of France and Holland etc. the public had been under the impression that resistance was futile against the Germans. However after they saw the huge numbers of German bombers and fighters shot down after the disastrous daylight bombing campaign that Hitler had ordered against London in retaliation for the bombing of German cities, their faith was restored. Although the Battle of Britain was a victory for the British and indirectly contributed to America's entry into the war, it was in the scheme of things a small and mostly insignificant turning point. This is because the Battle of Britain did not contribute in a huge way to the defeat of Germany and only insured Britain's security. It could be argued that the only reason that Britain did managed to survive is because Hitler's attention was being held in Eastern Europe by Stalin and the Red Army. If however Britain had fallen then America would not have had a staging ground for the D-Day landings, and consequently would probably not have ever breached fortress Europe. Britain's survival did indirectly assist in the defeat of Germany because it forced Hitler to keep valuable troops stationed on the French and Normandy coastline that could have been used in the invasion of Russia. It is difficult to judge exactly how important the Battle of Britain was as a turning point because there are so many factors to take into consideration. Overall I believe that it was not a hugely important turning point but it was indirectly responsible for several important factors that contributed to other major turning points. ...read more.

Pearl Harbour. This surprising and dishonourable move by the Japanese is perhaps what prompted the Americans to use their new weapon, the atom bomb on Hiroshima and Nagasaki. Both Pearl Harbour and the use of the atom bomb on civilians were major turning points of World War II. Pearl Harbour was the excuse that Roosevelt needed to convince the American public that war with Japan and its allies was necessary to secure the safety of the country. This caused the American public to agree to go to war with Germany and consequently facilitate its defeat. The atom bomb virtually shattered the Japanese belief in their own superiority to other races and caused them to surrender to the U.S. on the 11th of August 1946 destroying the remnants of the Axis alliance. In conclusion I believe that the failure of Operation Barbarossa was the most important turning point of World War II. Although it could be argued that it was only because the British had held the Germans attention in the West, because the Russians managed to destroy over 607 divisions of German armour and infantry, permanently crippling the Nazi Eastern Empire. Overall World War II was by far the most costly conflict that the world has ever seen. Millions upon millions of men and machines were poured into a conflict of ideology and pride. Although humanitarianly expensive, the sacrifice that all the brave men and women gave, whatever their nationality, has helped to insure the peace and economic stability that we take for granted today, and we must remember the terrible events of 1939-45 so that we can insure they never happen again. ...read more.