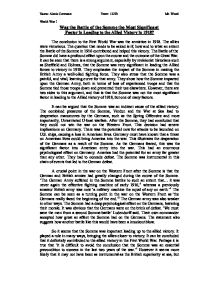 Was the Battle of the Somme the Most Significant Factor in Leading to the Allied Victory in 1918?

Until the Revolution of November 1917 took her out of the war, Russia, with her great reserves of manpower, took much strain off the Allies in the Western Front. This was in spite of her own heavy losses on the Eastern Front. The Allied superiority in manpower was vital in a war of 'attrition' where casualty rates were so high. This eventually allowed the Allies to overcome the more efficient but smaller German armies. By contrast Germany's allies - Austria-Hungary, Turkey and Bulgaria - all proved to be weak and in need of support from Germany. Germany's war effort therefore, relied mainly on her own strength and, although this was considerable, the odds against her by the end of the war were overwhelming - she was at war with 27 countries by 1918. The entry of the U.S.A into the war in April 1917 was a vital factor in the final Allied victory. The arrival of fresh American troops on the Western front by 1918 was not only of great practical assistance to the Allies but also a tremendous boost to their morale. For the Germans, however, it was a great psychological blow - one enemy, Russia, had just been forced out of the war only to be replaced by an even more powerful adversary. American troops and supplies played an important part of the final offensive on the Western Front in 1918. ...read more.

This means that their final land offensive could go ahead without interference from German air attacks. Another factor was that whilst Britain fully mobilised her civilian population to pursue the war, Germany failed to achieve the same degree of mobilisation. The German economy was not controlled by the state, industries were not nationalised, and landowners were left pretty well untouched. The result of this was that Germany was never able to meet the military necessities of World War I. With the failure of the Schlieffen Plan in 1914 it was almost inevitable that Germany would lose World War I. Despite this Germany chose to fight a two front war and suffered the inevitable consequences of this. German politicians were either unable or unwilling to accept a compromise peace. The surrender of Russia did offer some hope to the Germans in 1918, but this was quickly offset by the entry of America with her huge industrial might. 1 From 'Forgotten Victory' by Gary Sheffield 2 From 'The Somme 1916; Crucible of a British Army' by Michael Chappell 3 France in the West - Russia in the East 4 In 1918 alone Britain spent �2,700 million 5 The German High Seas Fleet refused to put to sea when ordered out in a final 'suicide' battle with the British Fleet. 6 The title shows the opinion that the book sets out - Laffin is highly biased in favour of the German armies, even though he is Australian. Name: Alexis Cormano Form: 12HB Mr. Wood World War I ...read more.