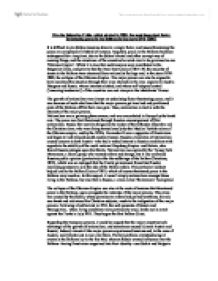 Was the Bulgarian Crisis, which started in 1885, the most important factor threatening peace in the Balkans in the years 1870-1890?

Was the Bulgarian Crisis, which started in 1885, the most important factor threatening peace in the Balkans in the years 1870-1890? It is difficult to pin Balkan tensions down to a single factor, and issues threatening the peace are composed of a hybrid of reasons. Arguably, peace in the Balkans had been endangered for a long time, due to the Sultan's brutal and often corrupt way of running things, and the reluctance of the countries he ruled over to be governed as one 'Ottoman Empire'. Whilst it is true that such tensions were manifested in the Bulgarian Crisis, and prior to that the Near East Crisis of 1875-78, the majority of issues in the Balkans were stemmed from nationalist feelings and, in the years 1870-1890, the collapse of the Ottoman Empire. The major powers can also be argued to have escalated the situation through their own interests in the area- especially Austria-Hungary and Russia, whose interests clashed, and whose self-adopted control ('annexing tendencies') of the countries was not always to the inhabitants' favour. The growth of nationalism was always an underlying factor threatening peace, and it was because of such rebellions that the major powers got involved and partitioned parts of the Balkans off for their own gain. ...read more.

The way this threatened peace was self-explanatory, and in turn this affected the interests of the other major powers. Germany, for example, was uninterested in the Balkans themselves, with Bismarck deeming them unworthy of 'the healthy bones of a single Pomeranian musketeer', but was forced to get involved in order to keep Russia and Austria in check. He called this the 'balancing of discontents'. This union was established in the Three Emperor's Agreement of 1873 and, despite valiant attempts to juggle the two countries, conflict still found a way through, such as in negotiations in 1887, when Austria only agreed to remain neutral if their Balkan interests were fully respected (a term it was inevitable for Russia to infringe). Of course, Germany employed the use of other countries to help her in this 'balancing' task, e.g. Britain and Italy. Germany appealed to Britain to play a leading role in opposing Russia, which they accepted, already suspicious by tradition of Russian interests in the Balkans. This is an example of how other countries were drawn in by the major powers' interests in the Balkans, and the Balkan and Bulgarian Crisis demonstrate how such involvement could fuel further rebellion, and therefore further threaten the peace. ...read more.

In fact, there was danger of war at the end of 1886 and in 1887, due to Russian dissatisfaction, and this crisis was only solved peacefully due to the efforts of Bismarck (perhaps the only positive, peaceful influence a major power managed to have in the Balkans). It is misleading then, to claim the Bulgarian Crisis is the biggest threat to peace in the Balkans; the previous Balkan Crisis was just as destructive and involved massive atrocities with the Bulgarian massacres. However, in conclusion, it is still more accurate to put the threatened peace in the Balkans down to several factors of equal importance. Firstly, nationalism was a long-term factor within the Ottoman Empire, inevitably, being precariously made up of so many different nationalities. However, the major powers helped to stir up and abuse such feelings, especially the foreign policies of Russia and Austria-Hungary. Had Russia not stirred up Panslavism, there may not have been as ferocious a rebellion and consequent quashing of one and the great powers needn't have got involved. Austria too, naturally wanting to preserve her own multi-national empire wouldn't have had to oppose Russian designs. In this aspect then, the biggest factors threatening peace in the Balkans were the major powers' mishandling and own self-interests in the Balkans and the nationalism causing such unrest in the first place. ...read more.