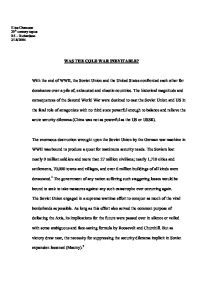 Was the Cold War Inevitable?

Elias Chamoun 20th century topics R5 - Richardson 2/18/2004 WAS THE COLD WAR INEVITABLE? With the end of WWII, the Soviet Union and the United States confronted each other for dominance over a pile of, exhausted and chaotic countries. The historical magnitude and consequences of the Second World War were destined to cast the Soviet Union and US in the fatal role of antagonists with no third state powerful enough to balance and relieve the acute security dilemma (China was not as powerful as the US or USSR). The enormous destruction wrought upon the Soviet Union by the German war machine in WWII was bound to produce a quest for maximum security needs. The Soviets lost nearly 9 million soldiers and more than 27 million civilians; nearly 1,710 cities and settlements, 70,000 towns and villages, and over 6 million buildings of all kinds were devastated.1 The government of any nation suffering such staggering losses would be bound to seek to take measures against any such catastrophe ever occurring again. The Soviet Union engaged in a supreme wartime effort to conquer as much of the vital borderlands as possible. ...read more.

However, the United States still did not have the inclination or the incentive to challenge Soviet activities in Eastern Europe because it was obviously dependent on Soviet assistance in the Far East and was still hoping that nothing would interfere with a return to normalcy. Truman lacked Roosevelt's incentive to avoid a rupture with Stalin. Almost from the beginning he regarded Soviet breaches of agreement as just that--breaches of agreement. He did not need to ask whether the ideological terms and the political aims they proclaimed, meant the same in the East as in the West. Truman could see that the consequences of Soviet actions posed difficult problems for the United States, and he was personally convinced that further concessions would only worsen rather than improve the Western position. Consequently, without adopting any consistent or purposeful course of action, Truman nevertheless refused to make any more concessions for the sake of preserving amicable relations or to concede anything that was not already within the Soviet orbit of power. As cooperation between Soviet and Western powers weakened, the relationship inevitably turned into competition and rivalry. The Soviet Union was guided by a view of history that postulated the inevitability of a hostile international environment as long as capitalist states existed. ...read more.

Failure to consult with him adequately and with his apparently conciliatory attitude toward Russia in the course of the December Foreign Ministers Meeting in Moscow, Truman bluntly ordered Byrnes to adopt a ''tough line".5 Within six months after the war's end all pretense of friendship between the US and USSR was being dropped. Henceforth each side would interpret all moves as basically hostile and therefore would act accordingly. Had Germany and Japan not been reduced to impotence by unconditional surrender or had France, Britain, and China been able to maintain control of their traditional spheres of influence, the Soviet-American confrontation might have been somewhat less stark and threatening (Leffler).6 Nothing is inevitable, but the leaders of that period of time couldn't predict the future, and thus they didn't realize what consequences their actions would have. Judging from the way the two sides acted, the Cold War was inevitable. Both sides misunderstood each other and were equally uncompromising. Their actions dragged the world into the "Coldest" of all conflicts, the Cold War. 1 Martin McCauley. The origins of the Cold War 1941-1949. 2 Ibid. 3 Ibid. 4 Primary documents packet (speeches). 5 Martin McCauley. The origins of the Cold War 1941-1949. 6 Ibid. ...read more.