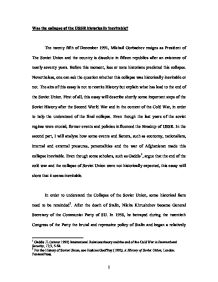 Was the collapse of the USSR historically inevitable?

Was the collapse of the USSR historically inevitable? The twenty fifth of December 1991, Mikhail Gorbachev resigns as President of The Soviet Union and the country is dissolute in fifteen republics after an existence of nearly seventy years. Before this moment, less or none historians predicted this collapse. Nevertheless, one can ask the question whether this collapse was historically inevitable or not. The aim of this essay is not to rewrite History but explain what has lead to the end of the Soviet Union. First of all, this essay will describe shortly some important steps of the Soviet History after the Second World War and in the context of the Cold War, in order to help the understood of the final collapse. Even though the last years of the soviet regime were crucial, former events and policies influenced the Breakup of USSR. In the second part, I will analyze how some events and factors, such as economy, nationalism, internal and external pressures, personalities and the war of Afghanistan made this collapse inevitable. Even though some scholars, such as Gaddis1, argue that the end of the cold war and the collapse of Soviet Union were not historically expected, this essay will show that it seems inevitable. In order to understand the Collapse of the Soviet Union, some historical facts need to be reminded2. ...read more.

A lot of factors are responsible of the Collapse of the Soviet Union. First of all, the falling economy and the large military expenditure in relation to the GNP played an important role, according to Kennedy6. Moreover, the command economy showed its limits, lead to stagnation, false statistics, corruption and grain dependence. Till the 70', the country reaches a certain level of power also because of the free manpower of the Gulags. Finally the reforms undertaken by Gorbachev in order to modify the inflexible economy and to give access to consumer goods came too late and were unable to correct the system. Second, Nationalism and ethnic pressures contributed also to the breakup of the Soviet Union. Nevertheless, a qualified exception to this argument is Russian elite separatist nationalism, led by Boris Yeltsin, which as also a direct impact on the Collapse. The Soviet Polity vis-�-vis nationalities, which in fact forced the Russian language, denied religions7 and led to a surge of Nationalism and ethnic pressure in 1988-1991 and weakened the state. Moreover, Mikhail Gorbachev failed to establish a viable compact between center and periphery during these years8. Finally his unwilling to use decisive force to quell ethnic and nationalist challenges accelerates the separation of the Soviet Union. Third, internal factors have happened. ...read more.

This war was long, expensive in cost, men and moral and affects the prestige of the army and of the State. It shows the nationalism inside the Red Army and thus society; Indeed a Muslim soldier did not want to fight others Muslims. Moreover, the war prevented any armed intervention in Eastern Europe and Particularly in Poland. The US financed the resistance and, in 1989, All the Soviet Troops had evacuated the country and an Islamic government came to power. The defeat was total for the Soviet Union and the Communist regime. The Breakup of USSR is inseparable with the End of the Cold War. Even though nobody predicted the Collapse the Soviet Union, it happened the twenty-fifth of December 1991, without resistance or counter-revolution. The Communist regime showed his inability to govern a multinational Empire and to compete with the United States. Gorbachev, by his reforms accelerated a process which was inevitable, after years of totalitarism. He puts an end to the Cold War, and by the way to the Soviet Union, giving up the supremacy to the United States. A last event totally finished to get the collapse inevitable, the Chernobyl nuclear meltdown in 1986. The incapacity of the regime to react and the lies to hide the width of the disaster consumed the state's credibility and its last chance to survive. ...read more.

Although there are some problems with written expression, the author covers a great deal of ground here and shows good understanding of events. The views of historians are also well engaged with. Links to the question could be stronger throughout.