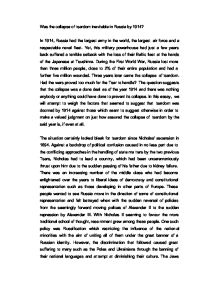 Was the collapse of tsardom inevitable in Russia by 1914?

Was the collapse of tsardom inevitable in Russia by 1914? In 1914, Russia had the largest army in the world, the largest air force and a respectable naval fleet. Yet, this military powerhouse had just a few years back suffered a terrible setback with the loss of their Baltic fleet at the hands of the Japanese at Tsushima. During the First World War, Russia lost more than three million people, close to 2% of their entire population and had a further five million wounded. Three years later came the collapse of tsardom. Had the wars proved too much for the Tsar to handle? The question suggests that the collapse was a done deal as of the year 1914 and there was nothing anybody or anything could have done to prevent its collapse. In this essay, we will attempt to weigh the factors that seemed to suggest that tsardom was doomed by 1914 against those which seem to suggest otherwise in order to make a valued judgment on just how assured the collapse of tsardom by the said year is, if even at all. The situation certainly looked bleak for tsardom since Nicholas' ascension in 1894. ...read more.

The result of this were inherent splits in the country and growing dissatisfaction which seemed to point towards the impending collapse of tsardom in the near future. The events that led however were more serious. With Russia's costly battle with the Japanese and failure to bring victory home, there was great humiliation having lost to a supposedly inferior island nation. This contributed to the buildup of tension leading up to the 1905 revolution. The Bloody Sunday incident, which was essentially a petition to the Tsar by groups of workers and their families to relieve them of their desperate conditions but ended in a violent dismissal with 200 marchers killed and hundreds injured gravely damaged the image of Nicholas II as the anointed protector and ruler of the country. Following the disorder that followed and the Potemkin mutiny, the Tsar was forced to issue the October Manifesto in the face of such united opposition. The revolution revealed the cracks in the system and showed that in the face of pressure, even the 'great' Tsar had to look towards appeasement. Compared to the unquestionable authority and absolute respect held by previous Tsars from the masses for the past 300 years, Nicholas's reign seemed to be look bleak and it would not have been far-fetched to have considered a possible end to tsardom at that point in time. ...read more.

It is therefore at this point not absolute that tsardom was doomed to collapse by 1914 despite growing unhappiness; for while the boat of tsardom was rocking, it could easily be stabilised as long as control over the military was held and key groups of people appeased; thereby limiting the ability of anyone from removing the entire institution. The First World War would prove to be the catalyst for the 1917 revolution as well as the collapse of tsardom because it removed the stabilisation criterion from the equation. With the desertion of one million soldiers as well as the loss of support of close aides and supporters with them going so far as to call for his abdication, Nicholas II no longer had the necessary support needed to maintain his reign and subsequently this ended tsardom in its entirety. We can therefore say at this point that without the foundations for the collapse in place, which would be the events from 1894 to 1905, tsardom might not have collapsed and it was the culmination of all these factors that spelt its end. But if the First World War had not happened, there would not have been a catalyst for this reaction and it would have materialised. Therefore, I am not in support of the view of the assured collapse of tsardom by 1914. (1251 words) ...read more.