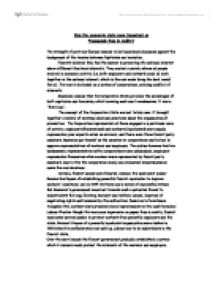 Was the corporate state more Important as Propaganda than in reality?

Was the corporate state more Important as Propaganda than in reality? The strength of post-war Europe seemed to be hazardously balanced against the background of the tension between Capitalism and socialism. Fascists believed they had the answer in promoting the national interest above different fractions interests. They wanted a society where all people involved in economic activity (i.e. both employers and workers) could all work together in the national interest, which in the end would bring the best result for all. This was to be based on a system of corporations, avoiding conflict of interests. Mussolini claimed that his Corporative State provided the advantages of both capitalism and Socialism, whilst avoiding each one's weaknesses. It was a 'third way'. The concept of the Corporative State was not totally new. ...read more.

Existing Socialist and Catholic unions, deprived of negotiating rights and harassed by the authorities, faded out of existence. Alongside this, workers were promised social improvements in the much heralded Labour Charter though this was more impressive on paper than in reality. Fascist syndicates proved unable to protect workers from powerful employers and the state. Rossoni's hopes of a powerful syndicalist organization were dashed in 1928 when his confederation was split up. Labour was to be subordinate in the Fascist state. Over the next decade the Fascist government gradually established a system which it claimed would protect the interests of the workers and employers. Economic development would proceed through harmonious co-operation in the interests of the state. A new chamber of representatives of all aspects of the economy eventually replaced the old Parliament, so the corporative approach finally covered the political as well as the economic organization of Italy. ...read more.

There is many view that believe that the corporate state was not what it seemed, saying that "the corporate state system proved totally irrelevant", "was a political experiment" for Mussolini's own propaganda gain in "the eyes of the foreigners" It has been argued that Mussolini never took the system that seriously, except for propaganda purposes. He was concerned not to alienate the economic elite. So the Corporative State became little more than an instrument for exploitation in the workplace and a powerless sham as a national structure. Significantly Mussolini failed to 'launch a battle for corporations' and the slow and lethargic way in which the system was implemented reflected his caution. Overall the corporate state was a nice idea but that's all it was it never really made a major effect it was a propaganda tool for Mussolini's own bidding and use. ...read more.