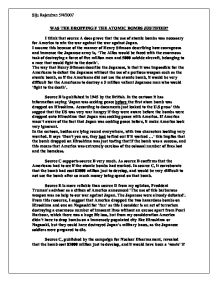 Was the dropping of the atomuc bombs justified? - source related study

WAS THE DROPPING F THE ATOMIC BOMBS JUSTIFIED? I think that source A does prove that the use of atomic bombs was necessary for America to win the war against the war against Japan. I assume this because of the manner of Henry Stimson describing how courageous and immense the Japanese army is, 'The Allies would be faced with the enormous task of destroying a force of five million men and 5000 suicide aircraft, belonging to a race that would fight to the death'. The way that Henry Stimson describe the Japanese, is that it was impossible for the Americans to defeat the Japanese without the use of a perilous weapon such as the atomic bomb, as if the Americans did not use the atomic bomb, it would be very difficult for the Americans to destroy a 5 million valiant Japanese men who would 'fight to the death'. Source B is published in 1945 by the British. In the cartoon it has information saying 'Japan was seeking peace before the first atom bomb was dropped on Hiroshima. ...read more.

Source E is more reliable than source D from my opinion, President Truman's advisor as a citizen of America announced 'The use of this barbarous weapon was no help to our war against Japan. The Japanese were already defeated'. From this resource, I suggest that America dropped the two hazardous bombs on Hiroshima and one on Nagasaki for 'fun' as this I consider is an act of terrorism destroying a enormous number of innocent lives without an excuse apart from Pearl Harbour, which there was a huge life loss, but from my consideration America didn't have to drop bombs on a immensely populated city like Hiroshima or Nagasaki, but they could have destroyed Japan's military bases, as the Japanese soldiers were prepared to die. Source C, published by the campaign for Nuclear Disarmament, revealed that the bomb cost $2000 million just to develop, and it would have been a 'waste' if the Americans did not use it, and Nagasaki was just an excuse of trying out the second type. ...read more.

This suggest that America was confident of defeating Japan, but they were scared to lose a predicted half a million American soldiers. So if America didn't want to lose this large total of American lives they had to strike Japan with minimal loss, to drop the two bombs at Hiroshima and Nagasaki. Source K is a fairly reliable source. 'We were under incredible pressure to get the bomb ready before the conference (between the Americans and the Russians).the intention of the president was to say to the Russians that we had a new weapon that we planned to use in Japan and it was very powerful' This verifies that Americans did it to frighten the Russians, and if Americans did not drop the bombs, it would make the Americans look weak as the Russians would have thought the Americans just talk but they do not take action. Source D is not a very reliable source, as even Americans could have defeated the Japanese, America was likely to have a huge life loss. In conclusion I think that America dropped the bombs on Hiroshima and Nagasaki in act of revenge of Pearl Harbour. Siju Rajendran 5/4/2007 ...read more.