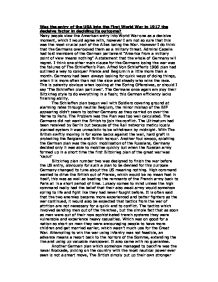 Was the entry of the USA into the First World War in 1917 the decisive factor in deciding its outcome?

Was the entry of the USA into the First World War in 1917 the decisive factor in deciding its outcome? Many people view the American entry into World War one as a decisive moment, which I would agree with, however I am not so sure that this was the most crucial part of the Allies losing the War. However I do think that the Germans overlooked them as a military threat. Admiral Capelle had told members of the German parliament "America from a military point of view means nothing" A statement that the whole of Germany will regret. I think one other main clause for the Germans losing the war was the failures of The Schlieffen's Plan. Alfred Von Schlieffen's 1906 plan had outlined a way to conquer France and Belgium in a little more than a month. Germany had been always looking for quick ways of doing things, when it is more often than not the slow and steady who wins the race. ...read more.

Lunacy comes to mind unless the high command really had the belief that their also weak army would somehow spring to life and fight like they had never fought before. It is often said that the two enemies became more experienced and better fighters as the war continued, it would also be expected that tactics from the war of attrition are not necessary for a quick end to conflict. The tactics which involved sending men out of the trenches, but the simple fact that as soon as men were out of their now sophisticated trench systems they were vulnerable and experience heavy casualties. Which was on good for a nation so short on men they were encouraging people to have more children and get married earlier, which wasn't much use for the Great War. Attempting to win the war using infantry was not feasible, an advance means a resort back to the horrors of the Somme, extending the line and using up valuable manpower. ...read more.

Once again someone was quicker than the Germans. Separating the Allies had recently become considerably harder anyway as they were no longer fighting like two countries, they were now a fused fighting machine under General Foch. The German attack ran out of steam, their bigheaded nature also meant there was a lack of back up planning; failure didn't appear in their dictionary. The Joint Leadership of the Allied forces was a key factor in the failures of the spring offensives. The countries could no longer blame each other, they were united as one force to defeat the Germans, they had showed they were stronger than previous allies Russia who had crumbled, the war on two fronts was over, could the tides turn? While the Allies lost Russia, Germany also lost their help in the east from the previously buoyant ally Austria. They were not only a means of military support but also a way of providing thee armies with food and shells to fire. ...read more.