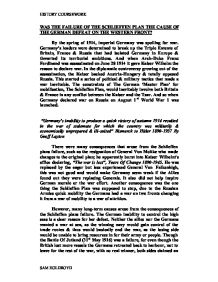 WAS THE FAILURE OF THE SCHLIEFFEN PLAN THE CAUSE OF THE GERMAN DEFEAT ON THE WESTERN FRONT?

WAS THE FAILURE OF THE SCHLIEFFEN PLAN THE CAUSE OF THE GERMAN DEFEAT ON THE WESTERN FRONT? By the spring of 1914, imperial Germany was spoiling for war. Germany's leaders were determined to break up the Triple Entente of Britain, France & Russia that had isolated Germany in Europe & thwarted its territorial ambitions. And when Arch-Duke Franz Ferdinand was assassinated on June 28 1914 it gave Kaiser Wilhelm the reason to declare war. In the diplomatic controversy growing out of the assassination, the Kaiser backed Austria-Hungary & totally opposed Russia. This started a series of political & military tactics that made a war inevitable. The constraints of The German 'Master Plan' for mobilisation, The Schlieffen Plan, would inevitably involve both Britain & France in any conflict between the Kaiser and the Tsar. And so when Germany declared war on Russia on August 1st World War 1 was launched. "Germany's inability to produce a quick victory of autumn 1914 resulted in the war of stalemate for which the country was militarily & economically unprepared & ill-suited" Bismarck to Hitler 1890-1937 By Geoff Layton There were many consequences that arose from the Schlieffen plans failure, such ...read more.

Yet again, Britain outmanoeuvred a strong German tactic by introducing the Convoy System, a plan devised to stop the sinking of merchant ships by U-Boats, by positioning 4-5 British Frigates around the merchant ship to take the blow, therefore Germany's attempts to starve Britain into submission was unsuccessful. With long-term causes to the German defeat there are ultimately short term causes. One of these was the Sinking of the British passenger liner The Lusitania by a German U-Boat in May 1915. Of the one thousand, two hundred victims that perished, one hundred & thirty nine were American, causing public outcry, in part because the Germans had medals struck to commemorate the sinking. At this stage the United States were adamant not to become involved in the war. The USA had severed diplomatic relations with Germany on 3rd February 1917 after discovering they were trying to recruit Mexican assistance should the US join the war against Germany. War was declared on 2nd April 1917 however, American troops didn't land in France until spring 1918 almost a year after war was declared. ...read more.

October 1918 saw the mutiny of the German Navy at Kiel. Admirals planned a last offensive on the British blockade that was starving out the nation. The sailors viewed this mission as suicidal and claimed command over the ships, Officers were killed and Naval Boats were captured. This was the final nail in the coffin for a German victory on the Western front. The amnesty was eventually signed on 11 November 1918, which introduced the Treaty of Versailles and ended the war, whilst Kaiser Wilhelm abdicated 17 days later on 28th November & fled to Holland thus ending the reign of Kaisers in Germany. In answer to the question, I believe the answer is no. The Schlieffen plan was not the sole cause of the German defeat on the Western Front in 1918. The plan failed on 11 September 1914 whereas the war ended on 11 November 1918, exactly four years & three months after the plan failed. However, the consequences of the failed plan led to many long & short-term causes that further led to the demise of the Germans on the Western Front from 1914-1918. ?? ?? ?? ?? HISTORY COURSEWORK SAM HOLDROYD ...read more.