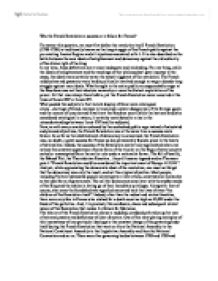 Was the French Revolution a success or a failure for France?

Was the French Revolution a success or a failure for France? To answer this question, we must first define the revolution itself. French Revolution (1789-1799) is traditionally known as the long struggle of the French public against the pre-existing Ancien Regime and all injustices associated with it. It is also described as the battle between the new ideals of enlightenment and democracy against the old authority of the divine right of the king. In my view, these definitions are at once inadequate and misleading. For one thing, while the ideals of enlightenment and the teachings of the 'philosophes' gave impetus to the cause, the ideals were certainly never the actual triggerant of the revolution. The French middleclass and peasantry were hardly politically involved enough to wage a decade-long struggle against mere ideals. What brought in the entire public an unquenchable anger at the Bourbons was not their absolute monarchy or even the blatant exploitation of the power. ...read more.

The call for democracy came later with the stubbornness of the King and the nobles in letting go of their hereditary privileges. Alongwith that of course, also came the bloodshed who appalled many and took the lives of even "the children of the Revolution itself". Indeed, other than the radical and violent Jacobins, there were very few in France who wished for a death count as high as 40,000 under the blade of the guillotine. And, it is precisely this confusion, chaos and subsequent violent nature of the Revolution that makes it a failure for Marianne. The history of the French Revolution shows a muddled, confused path taken up by men of extreme passion and deficiency of clear direction. One of the most glaring examples of this inconstancy of one particular ideology is the constant change of the governing body itself during the French Revolution that went on from the National Assembly to the National Constituent Assembly to the Legislative Assembly and then the National Convention and so on. ...read more.

It was from this point that the French Revolution was quickly turned into one of the bloodiest repressions in history. The ideals of Equality and Liberty which had originally made the revolution a completely new chapter (and yes, a successful one) in the contemporary world affairs, became farce under the new dictatorship of the bloodthirsty Robespierre. Of course, this was not permanent and order was restored again, at first an indecisive temporary peace with the Thermidorian Reaction and then finally, five years later, with the Brumaire Coup and the establishment of the Napoleonic empire. But, as far as the success of the revolution (or the lack of it) is concerned, we can safely say the French Revolution was definitely a success for France. While it had its inherent flaws and share of bloodshed, its virtues have long outlived its defects. An inspiration to the oppressed for years to come, and emulated in the many other countries in the next two centuries including Russia, the cry of "Liberty, Equality and Freedom!" live on as a gem in the history of France. ...read more.