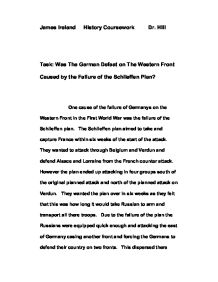 Was The German Defeat on The Western Front Caused by the Failure of the Schlieffen Plan?

James Ireland History Coursework Dr. Hill Task: Was The German Defeat on The Western Front Caused by the Failure of the Schlieffen Plan? One cause of the failure of Germanys on the Western Front in the First World War was the failure of the Schlieffen plan. The Schlieffen plan aimed to take and capture France within six weeks of the start of the attack. They wanted to attack through Belgium and Verdun and defend Alsace and Lorraine from the French counter attack. However the plan ended up attacking in four groups south of the original planned attack and north of the planned attack on Verdun. They wanted the plan over in six weeks as they felt that this was how long it would take Russian to arm and transport all there troops. Due to the failure of the plan the Russians were equipped quick enough and attacking the east of Germany casing another front and forcing the Germans to defend their country on two fronts. This dispersed there troops across two places and therefore no one place was stronger than the other causing a halt in the war. This then caused trench warfare which slowed the war down and then Germany started to loose troops and money. ...read more.

This was the worst consequence during the war as the Americans were also supplying ammunition to the Germans so when they entered on the side of the allies the Germans lost the supply of the Americans. Another cause for the failure of Germany on the western front was the introduction of America in the war. The Americans had a very large army and was a very rich country so when they came in on the sides of the allies there was a new balance of fresh troops to strengthen the forces at both fronts and also financial security. The Germans were at a loss after America joined as they now had 3 large powers 2 fight against where as before there was only France and Britain with the Russians on the eastern front. This was a long term cause as it still took a long time from when America joined the war for Germany to declare defeat. Another cause of the failure of the Germans on the western front was the string of heavy defeats suffered throughout the war. With these defeats the morale of the German people and the German forces dropped dramatically as it became more and more clear that the war was on a downward slope towards defeat and that is not what the people of Germany wanted. ...read more.

However this made them extremely tired and as morale was so low because so much was asked they refused to fight anymore and instead of going through with the offensive they looted all of the British possessions and returned home ending the offensive in great embarrassment to the Germans. In conclusion I feel that although the failure of the Schlieffen plan was important in the defeat of Germany on the western front it was not the only cause for it. There were a number of long term causes including the allied sea power, the failure of the German submarine campaign in the Atlantic ocean, the USA entering the war, the strain of heavy losses and Germany being let down by its allies. There was also one short term cause that helped towards the defeat of the Germans on the western front and that was the Ludendorff offensive. Now the connections between the sources show that the submarine campaign by the Germans in the Atlantic bought USA into the war which was the worst thing that could have happened as America could be the turning point and the decisive element in winning or loosing the war for Germany. The strain of losses also sank German morale which could be seen to have been the reason for the troop's failure in the Ludendorff offensive. ...read more.