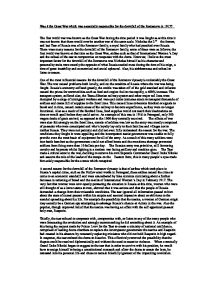 Was the Great War Responsible for the Downfall of the Romanovs?

Was it the Great War which was essentially responsible for the downfall of the Romanovs in 1917? The first world war was known as the Great War during the time period it was fought as at this time it was not known that there would ever be another war of the same scale. Nicholas the 2nd the former, and last Tsar of Russia was of the Romanov family, a royal family who had presided over Russia. There were many reasons for the downfall of the Romanov family, some of these were as follows; the first world war known at that time as the Great War, strikes such as that of International Women's Day and the refusal of the tsar to compromise or cooperate with the duma. However, I believe the most important factor for the downfall of the Romanovs was Nicholas himself as his character and personality traits were exactly the opposite of what Russia needed most during the time of his reign, a time of great instability and economical and social upheaval. Also, his stubbornness and refusal to listen to reason. ...read more.

They were not patriotic and did not even fully understand the reason for the war. The conditions they fought in were appalling and the incompetent tsarist government was unable to fully provide even the most basic of equipment for all of the army. As a result of this many soldiers went into battle barefoot as the government could not afford boots and the munitions shortage prevented soldiers from firing more than 10 bullets per day. The Russian army was primitive, still favouring cavalry and bayonets whilst fighting in a modern war facing artillery and machine guns. The Tsar made a critical error in the war, deciding to remove his own Supreme Commander Grand Duke Nikolai and assume the role of the leader of the troops on the Eastern front, this in many people's eyes made him solely responsible for the events which conspired. A second reason for the downfall of the Romanov dynasty is that of strikes which took place in Russia's capital cities, such as the Putilov steel works in Petrograd, these strikes caused the cities to come to an economic standstill and were exacerbated by false rumours circulating about a further decrease in rationing of bread and the results of International Women's Day in February 1917. ...read more.

leading duma members to replace the incompetent government the tsarina and Rasputin had created in his absence by constantly replacing ministers who did not hold Rasputin in high regard. In response, the tsar ordered the duma to dissolve. This effectively removed the possibility that the dispute could be resolved diplomatically and without the need to resort to violence. When eventually Grand Duke Nikolai began to suggest to the tsar that in order to survive with his position, he would have to resign himself to being a constitutional monarch and allow the duma to create the laws, he retreated into his personal life and chose to remain blissfully ignorant of the impending revolution. In conclusion I believe that the Great War was a key factor in the downfall of the Romanov dynasty. However, there were also several other reasons, such as protest strikes such as International Women's Day and most importantly in my opinion, the tsar himself. In particular his tendency to retreat into his personal life whenever reality set in and his refusal to take advice from the duma and others who realised what Russia really needed to recover both socially and economically. -Antonia Dali ?? ?? ?? ?? ...read more.