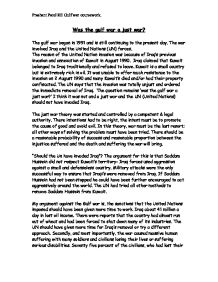 Was the gulf war a just war?

Was the gulf war a just war? The gulf war began in 1991 and is still continuing to the present day. The war involved Iraq and the United Nations (UN) forces. The reason of the United Nation invasion was because of Iraq's previous invasion and annexation of Kuwait in August 1990. Iraq claimed that Kuwait belonged to Iraq traditionally and refused to leave. Kuwait is a small country but is extremely rich in oil. It was unable to offer much resistance to the invasion on 2 August 1990 and many Kuwait's died and/or had their property confiscated. The UN says that the invasion was totally unjust and ordered the immediate removal of Iraq. The question remains 'was the gulf war a just war?' I think it was not and a just war and the UN (United Nations) should not have invaded Iraq. ...read more.

The UN had tried all other methods to remove Saddam Hussein from Kuwait. My argument against the Gulf war is, the sanctions that the United Nations imposed should have been given more time to work. Iraq about 41 million a day in lost oil income. There were reports that the country had almost run out of wheat and had been forced to shut down many of its industries. The UN should have given more time for Iraq's removal or try a different approach. Secondly, and most importantly, the war caused massive human suffering with many soldiers and civilians losing their lives or suffering serious disabilities. Seventy five percent of the civilians, who had lost their lives or were suffering as a result of the war, were children. ...read more.

The UN should have given Iraq more time or try a different approach, instead of war. It would be unlikely he would be another Hitler form past experiences and other country powers. Although Kuwait is a small and defenseless country the UN should not have to gone to war and kill thousands of civilians, including children. As a result of the war the country had almost run out of wheat, which left unable to feed themselves. In conclusion, I feel the Gulf War was not a just war. The United Nations should have given Iraq more time or try a different approach against Saddam Hussein. It was not fair thousands of civilians lost their lives as a result of one mans actions. This was not a war against Saddam Hussein; in trying to remove Saddam Hussein from Kuwait the UN killed many innocent people. The war was so sever its affects still continue today. Prashant Patel RE Gulf war coursework. ...read more.