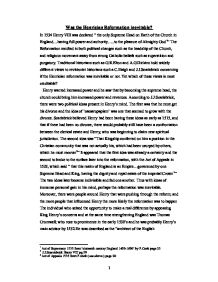 Was the Henrician Reformation inevitable?

Was the Henrician Reformation inevitable? In 1534 Henry VIII was declared " the only Supreme Head on Earth of the Church in England...having full power and authority.....to the pleasure of Almighty God1" The Reformation resulted in both political changes such as the headship of the Church, and religious movement away from strong Catholic beliefs such as superstition and purgatory. Traditional historians such as G.R.Elton and A.G.Dickins hold widely different views to revisionist historians such a C.Haigh and J.J.Scarisbrick concerning if the Henrician reformation was inevitable or not. Yet which of these views is most creditable? Henry wanted increased power and he saw that by becoming the supreme head, the church could bring him increased power and revenues. According to J.J Scarisbrick, there were two political ideas present in Henry's mind. The first was that he must get his divorce and the idea of 'caesaropapism' was one that seemed to grow with the divorce. Scarisbrick believed Henry had been having these ideas as early as 1515, and that if there had been no divorce, there would probably still have been a confrontation between the clerical estate and Henry; who was beginning to claim new spiritual jurisdiction. The second idea was "That Kingship conferred on him a position in the Christian community that was not actually his, which had been usurped by others, which he must recover2" It appeared that the first idea was already a certainty and the second to broke to the surface later into the reformation, with the Act of Appeals in 1533, which said " that this realm of England is an Empire...goverened by one Supreme Head and King, having the dignity and royal estate of the imperial Crown3" The two ideas later became indivisible and fed one another. Thus with ideas of immense personal gain in his mind, perhaps the reformation was inevitable. Moreover, there were people around Henry that were pushing through the reform; and the more people that influenced Henry the more likely the reformation was to happen ...read more.

Even the Pope, scared by the power of her nephew, would not permit himself to entirely ignore Catherine's cause. With the crucial lead figures in Europe making Henry's divorce a distant idea, he was forced to take more drastic and unplanned measures against Rome to make it a reality. It could be suggested that divorce seemed to be the trigger the move into reformation; one of the reasons being because it seemed a lengthy and almost impossible task. Henry had to apply directly to Rome to have his marriage annulled, and worrying about the time consuming task of traveling to Rome, Henry appealed to establish a court in England to hear the case in 1527. Eventually Pope Clement dispatched Campeggio to England who traveled slowly through ill health and once the case began at Blackfriars in 1529, he used delaying tactics under the instruction of the pope. These delaying tactics annoyed Henry and this perhaps was the point that relations between Henry and the Pope began to crumble.On July 31st 1529, the Pope recalled the case to Rome. Success had slipped through Henry's fingers and he suddenly needed a new way of obtaining a divorce. Through a lack of co-operation with one of the major powers in Europe Henry may have stumbled into the beginnings of a completely accidental reformation, all to achieve his divorce. Another religious factor suggesting that the reformation was an accident was Henry's devout Catholicism and he had previously shown he would not tolerate heresy. It has been said that the Act of Ten Articles of 1536 made concessions to Lutherans, but if so , they were concessions of omission rather than clear definition. The three of the seven sacraments that remained were defined in a strictly Catholic way; showing that perhaps Henry did not want to break with Rome, or indeed reform the Catholic church. In 1539 Henry passed the Act of Six Articles; a statement of absolute orthodox doctrine that reflected Henry's own personal views on keeping the church Catholic. ...read more.

The fact that the reformation occurred in such a piecemeal manner suggests that Henry had not intended on this massive reform. The fact that there was so little opposition to the reformation does not necessarily suggest it was wanted; " at any ones time there was not much Reformation to accept and England accepted its reformation because it didn't quite see what it was doing14 " The divorce along with the powerful influence of reformists at court meant Henry embarked on a reform that seemed an accident in its time. In looking at different historians points of views, the traditional theories behind the reformation are widely respected but some can have its downfalls. For example, it is argued by C.Haigh that the historian A.G.Dickins has a 'whiggish' point of view and his perspective on the reformation is too highly influenced by his protestant perspective. The more persuasive revisionist point of view on the reformation offers a much more balanced point of view that analyses the evidence. "So there was no cataclysmic Reformation, to be explained by mass enthusiasm. Instead, there was a piecemeal reformation, to be explained by the chances of day-to-day politics15" 1 Act of Supremacy 1535 from 'sixteenth century England 1450-1600' by P.Cook page 23 2 J.J.Scarrisbrick Henry VIII pg 59 3 Act of Appeals 1533 from P.cook ( see above ) page 20 4 G.R Elton Reform and Reformation pg 252 5 Quote from supplication of the beggars by Simon Fish in book by P Cook pg 15 6 G.R.Elton Reform and Reformation pg 119 7 G.R.Elton Reform and Reformation pg 74 8 Quote from the Act of Six Articles 1539 ib book by P.Cook pg 22 9 G. R.Elton Reform and Reformation pg 278 10 J.J.Scarisbrick Henry VIII pg 133 11 Quote from Act of conditional restraint of Annates 1532 book by P.Cook Pg 24 12 J.J.Scarisbrick Henry VIII pg 112 13 C.Haigh pg 267 14 C.Haigh The English Reformation revised pg 20 15 C. Haigh The English Reformation Revised pg 11 TOTAL WORD COUNT : 3,111 1 ...read more.