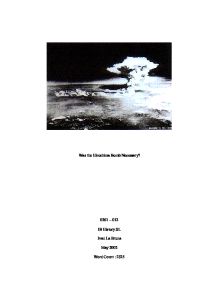 Was the Hiroshima Bomb Necessary?

Was the Hiroshima Bomb Necessary? 0261 - 012 IB History SL Ivan La Bruna May 2002 Word Count : 2325 Was the Hiroshima Bomb Necessary? During the middle of the twentieth century countries were involved in one of the most deadly wars of the century. European countries already had a war at the beginning of the century but they weren't able to avoid a second world war that involved also non-European countries. The expansion of the war made the alliances even bigger to the extent that there was too much power between the alliances causing the war to be inevitable. The countries started to war and slowly ran out of supplies and soldiers, this made alliances stronger and bigger because support was needed to continue war. The alliances would always end up to balance out because they prevented each other to have more power, as a result countries lost hopes for a closer end of war. The United States, to balance out the power and to solve their economic problems caused by the war, decided to join the war. Once in the war they also noticed that there was no hope to stop war quickly so they came to a solution, due to the circumstances, that war would stop if they would have dropped a disastrous atomic bomb over Japan. ...read more.

That was because we wished in this first attack to avoid, insofar as possible, the killing of civilians", when in reality the United States Strategic Bombing Survey stated in 1946 that the cities, "Hiroshima and Nagasaki were chosen as targets because of their concentration of activities and population" Mark Weber stated that "President Harry Truman, the killing of tens of thousands of Japanese civilians was simply not a consideration in his decision to use the atom bomb" because after the Hiroshima atomic bomb was dropped they dropped another one in Nagasaki and they mass killed most of the Japanese people destroying and burning the city of Tokyo creating a lot of prejudice among Americans about the Japanese. (Mark Weber) The problem that might have been would be the fact President of the United States was changed, Franklin Roosevelt was the President when the war began but on the 4th of December, 1945, he died and Harry S. Truman became president since he was the Vice President. He probably was unprepared for his new office to face the problem of war considering the mistakes he did but since no one expected the death of Roosevelt during such a critical moment, felt ready. A vice president has to represent the president that he is being replaced but Truman didn't actually replace Roosevelt with his own ideas because Roosevelt was against the bombing of civilians while Truman knew he was bombing civilians and that the atomic bomb was a terrible weapon. ...read more.

Truman's anger was so great that he wanted to seek revenge ,and the feeling of revenge started to spread around to the point that soldiers said, "Thank God for the atom bomb" giving more importance to the bomb rather than God itself because of the end of the war. (Mark Weber) United States made the wrong decision and was not able to see the consequences of the atomic bomb because they were blinded by revenge. But it isn't entirely their fault because if they were brought to do something so bad it was because of war and of people fighting for power. The fact that no one wanted to stop the war brought countries to enter a desperate situation. United States acted without thinking deeply about the consequences, they were full of anger and wanted to seek revenge because of the surprise attacks on Pearl Harbor and also to stop war to not see any more deaths. The fault was of the situation in which the world was in, war had to prevented and war should have been stopped, the fault therefore lies mainly on the countries who weren't able to control these factors. United States and Japan were not able to stop their war against each other and their situation did not able them to stop war. Countries after what happened will learn hopefully from their mistakes to avoid certain situations. ...read more.