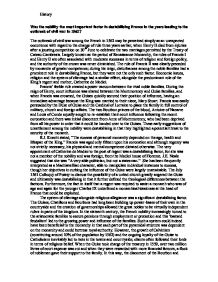 Was the nobility the most important factor in destabilising France in the years leading to the outbreak of civil war in France in 1562?

Was the nobility the most important factor in destabilising France in the years leading to the outbreak of civil war in 1562? The outbreak of civil war among the French in 1562 may be perceived simply as an unexpected occurrence with regard to the change of rule three years earlier, when Henry II died from injuries after a jousting competition on 30th June to celebrate the two marriages permitted by the Treaty of Cateau-Cambresis. Largely known as the period of Renaissance Monarchy, the rules of Francis I and Henry II are often associated with moderate successes in terms of religion and foreign policy, and the authority of the crown was never diminished. The rule of Francis II was clearly preceded by monarchs of greater competence; during his reign, disturbances among the noble families had a prominent role in destabilising France, but they were not the only such factor. Economic issues, religion and the system of clientage had a similar effect, alongside the predominant role of the King's regent and mother, Catherine de Medici. Francis' feeble rule created a power vacuum between the rival noble families. ...read more.

The system of clientage alongside religious allegiance was a significant destabilising factor. The Guises, Chatillons and Bourbons had long been building up power-bases of their own in the countryside and the creation of governorships allowed the great nobles to be virtually independent rulers in parts of the kingdom. In the sixteenth century, the French nobility increasingly turned to the aristocratic families to secure pensions through employment or protection and this 'bastard feudalism' led to the growing power and influence of the families. Such a system could indeed have been beneficial to the monarchy in that each part of the pyramidal structure was dependent on the monarchy and could buttress royal authority. However, the growth of Calvinism (constituting around 10% of the population by 1562) and the ongoing loyalty of the Guise to Catholicism inevitably led to riots in the towns and countryside; clients often followed their lords in terms of religious belief. When the Guise took charge of the treasury in 1559, over two million livres of court expense was cut and when they were rewarded with more financial favours, a flock of noblemen gave their support to the family. ...read more.

In practice, the so-called Tumult of Amboise was indiscreet, though had used forged letters from John Calvin to gain support from fellow nobles in attempting to capture the young King in order that Conde could be placed in power. Despite its failure, the plot suggests much about the reasons for civil war eventually breaking out in France - the combination of religious rivalry and factional politics was extremely destabilising during this period and class allegiance played an ongoing role in maintaining divisions between the factions. The outbreak of French civil war in 1562 can be attributed primarily to the weak monarchy. Even the very fact that Francis II could not rule alone was destabilising in its presentation of weakness and Catherine de Medici's regency was frequently misdirected. It is clear that the regency itself formed a strong secondary cause for the outbreak of civil war. However, a combination of religious, political and economic factors proved destabilising during the rule of the two young monarchs, alongside the legacy of fault from previous reigns, particularly the great French debt from the Habsburg-Valois wars. The nobility did play a pivotal role and the monarchy lacked a centralised control of the country and common laws. It was in this context that disorder leading to civil war was inevitable. History ...read more.