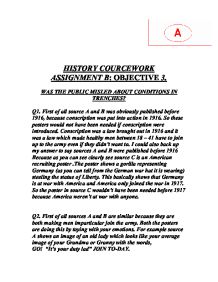 Was the public misled about conditions in the Trenches?

HISTORY COURCEWORK ASSIGNMENT B: OBJECTIVE 3. WAS THE PUBLIC MISLED ABOUT CONDITIONS IN TRENCHES? Q1. First of all source A and B was obviously published before 1916, because conscription was put into action in 1916. So these posters would not have been needed if conscription were introduced. Conscription was a law brought out in 1916 and it was a law which made healthy men between 18 - 41 have to join up to the army even if they didn't want to. I could also back up my answer to say sources A and B were published before 1916 Because as you can see clearly see source C is an American recruiting poster .The poster shows a gorilla representing Germany (as you can tell from the German war hat it is wearing) steeling the statue of Liberty. This basically shows that Germany is at war with America and America only joined the war in 1917. So the poster in source C wouldn't have been needed before 1917 because America weren't at war with anyone. Q2. First of all sources A and B are similar because they are both making men imparticular join the army. Both the posters are doing this by toying with your emotions. For example source A shows an image of an old lady which looks like your average image of your Grandma or Granny with the words, GO! "It's your duty lad" JOIN TO-DAY. Notice how the words are aimed at you as an individual, this is to put pressure on you and put you on the spot. I think this is toying with your emotions by it makes you feel as if you should be out fighting, protecting your family, in this case your Grandma. Another reason why it could be toying with your emotions is your Grandma could have passed away and you might think of her and think to your self that if you go you might make her and the rest of your family very proud of you and become a hero. ...read more.

Steward. This man was actually fighting in the Somme and he wrote the source from a first-hand account. Maybe the purpose for him writhing the source was so he made a realistic point of view of what happened instead of all the lies and cover up stories the that Government made up. Also another reason for source H not matching with sources F or G is it gives a negative but more realistic account of the war and the British army. Q6. Source I is like many other sources, for example sources F and G. It gives a positive image towards the British army, it shows some soldiers laughing having a good time and they all look to be clean and healthy. Also in the picture it doesn't look like there is any sign of war fighting or even any sign of dead bodies in fact the environment looks quite relaxing and peaceful. Even though this poster seems to be the exact opposite of life in the trenches it still does have a different prepossess. One is very simple it is to make men join up for the British army. It does this by it making men think that the British army looks just as it does on the picture. Even though the Government already knows it is not all-nice and peaceful, they know that it is the exact opposite but they still lie and publish the posters to trick men into joining up because the British army desperately needed troops. Another reason for the Government publishing this advertisement was again to keep up the moral of the British people in the United Kingdom. Source J is a very different account of life in the trenches it is memories of an infantry officer Siegfried Sassoon. It tells a quiet gory account of life in the trenches and in some ways it is quite stomach churning. ...read more.

Seen as thought it was 1918 and the war is over. Censorship wouldn't have been needed because all the soldiers who were fighting have now returned back home therefore would be able to tell true stories of what happened and would have been able to tell a very good account of what the trenches were really like. Also censorship wouldn't have needed to be used because if we have won the war then there would be no need to lie to the public because everything is now over and done with. This is why both the historians' answers will be very different. The historian who is writhing before 1918 lets say about 1915 would only have sources for example like sources I, F and G to work with and plus he or she will be working under the rules and laws of censorship. I think the historian writhing before 1915 would have an answer like. "The British were obviously winning the war easily by this time and the boys fighting are having a great time and basically relaxing in their trenches in the beautiful countryside and standing almighty against German scum". The historian writhing in 1918 would have an answer which would resemble sources H and J. It would be quite a realistic account of life I the and trenches the historian would have a lot of things to back his or her answer with like memoirs from soldiers. Also the historian maybe could have maybe interviewed some of the brave survivors of the Great War. So as you can see the historian writhing in 1918 would have had an all round clearer image of WW1. Mainly because of one main reason censorship was now not a law so newspapers could now print about things freely and so all the time he or she would be gaining more and more evidence to back his or hers answer up with to make there answer better. By Ryan Dench 10PDU. 10Pdu. ...read more.